The First Lady also played a game of bowls, engaging with gusto despite being in high heels, as she took part in a spouses' event hosted by British Prime Minister Theresa May's husband Philip. 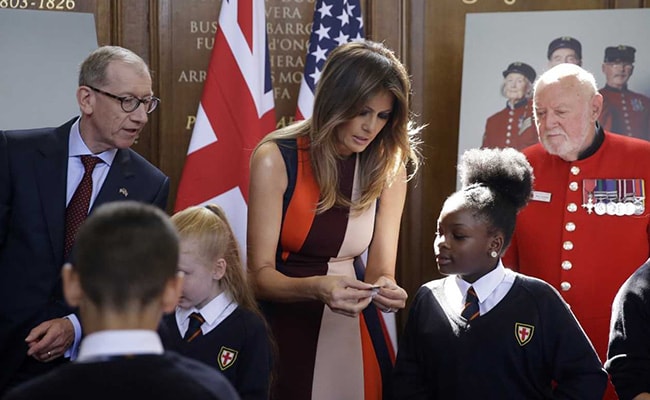 First Lady helps mingles with the children in the event.

With her husband busy plunging UK-US relations to new lows, Melania Trump took time out during the couple's four-day visit to Britain on Friday to meet veterans and make paper flowers with schoolchildren.

The First Lady also played a game of bowls, engaging with gusto despite being in high heels, as she took part in a spouses' event hosted by British Prime Minister Theresa May's husband Philip.

The pair met as US President Donald Trump held talks and a working lunch with May at her country retreat of Chequers, after excoriating her Brexit strategy.

The visit took place at London's Royal Hospital Chelsea, which has housed British veterans since the 17th century and is now home to around 300 former soldiers, known for their red uniforms and black caps.

Around a dozen children from a local school egged on Melania Trump and Philip May as they played bowls, waving British and US flags.

During the game, the First Lady high-fived a bemused-looking veteran. 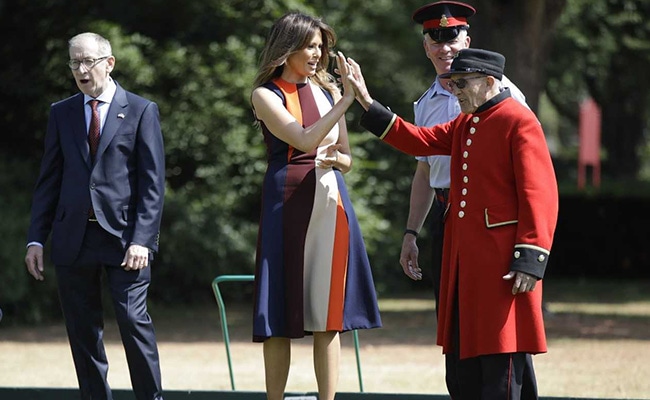 Melania Trump gives a high-five to one of the veterans.

She also helped the children as they assembled paper poppies in memory of fallen soldiers from World War I, and listened on as they asked the pensioners questions.

The event lasted around an hour and the pair avoided all questions.

(Except for the headline, this story has not been edited by NDTV staff and is published from a syndicated feed.)
Comments
Donad TrumpMelania TrumpUK-US Ties