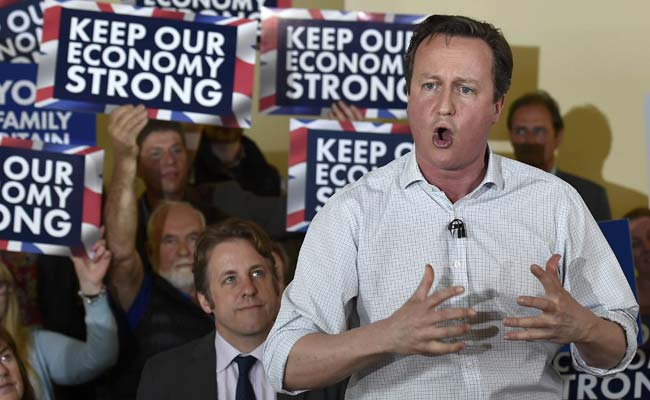 London: With elections looming in Britain, the Irish government has taken the unusual step of beginning a campaign to warn its biggest trading partner against leaving the European Union.

British Prime Minister David Cameron's promise of an EU membership referendum by 2017 if he is re-elected has set off alarm bells in Dublin, keen to guard its burgeoning recovery from a painful economic crisis.

"Keeping the EU intact, with the UK at the centre of it, is really worth fighting tooth and nail for," Irish Foreign Minister Charlie Flanagan said at the launch of a study on the possible impact of "Brexit", or Britain exiting Europe.

Concerns centre on the effect on trade between Britain and Ireland that amounts to over 1 billion euros a week ($1.1 billion) and the prospect of managing a land border with Northern Ireland, which is part of the United Kingdom.

Dublin is also loath to imperil progress on peace in the north, and the turnaround of its long-fraught relationship with Britain.

"It's the main geopolitical risk to Ireland in the next 12 months, more so than a war in Russia or the Greek situation spilling over," said Stephen Kinsella, senior economist at the University of Limerick.

Dublin kept silent over a 2014 referendum on Scottish independence, but has decided to speak out on EU membership, Ireland's ambassador to Britain Dan Mulhall told AFP.

"There is concern in Dublin. Ireland is the country that would be most affected by a British exit from the EU, apart from Britain itself," Mulhall told AFP.

"Whenever I have the opportunity I will make the point. In almost all of the speeches I do publicly I include an element about Europe."

A British exit from the EU would be an end to a forum in which Ireland has often found itself arguing on the same side as its neighbour, re-booting relations after centuries of acrimony between the two.

"The positive impact it has had on Northern Ireland, our economies, and the British-Irish relationship has been nothing less than transformative," Irish Prime Minister Enda Kenny said in a speech in Belfast in Northern Ireland in March.

A key concern is the physical return of a 90-year-old border between Ireland and Northern Ireland, which has all but disappeared in recent years.

"I'm old enough to remember what it was like in the bad old days when there were border controls on this island," said David Farrell, director of the Institute of the Irish-British Studies at University College Dublin.

"Over the long-term there are serious ramifications."

Kenny described Brexit as "the most profound issue that the North would have to deal with in the coming years," and is setting up a new government unit dedicated to Brexit and British-Irish ties.

Dublin is wary of any knocks to Ireland's economy, which has returned to growth after a devastating property crash but remains encumbered by high levels of public debt and 10 percent unemployment.

Any change to trade tariffs could affect the almost 200,000 people employed in Ireland whose businesses exports to Britain, which buys over 40 percent of Ireland's food and drink exports and half the beef of Europe's largest beef exporter, according to government figures.

A British exit could shrink Irish exports to the country by 3.6 percent if trade barriers were reinstated with the EU, according to "Britain and Europe: The Endgame -- An Irish Perspective", recently published by Dublin-based think tank the Institute of International and European Affairs.

Ireland would likely use the opportunity to try to lure Britain's foreign direct investment, manufacturing from the north of England, and attract businesses that might otherwise set up in Northern Ireland or Scotland, Kinsella said.

"There will be really large positives but large negative effects. In the short-run the negatives far outweigh the positives," the economist said.

Britain has often been an ally for Ireland around the EU negotiating table -- for example in favour of free trade policies and against a common EU corporation tax -- and its exit could raise questions about Ireland's own status in the bloc.