As Fighting Spreads, Sunni Rebels Turn on Each Other, Reports Say 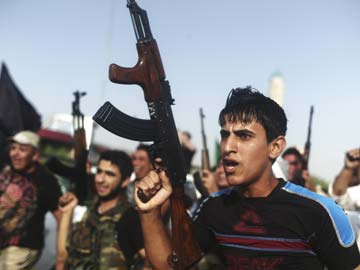 Armed men in a militia formed to defend the capital parade through the Sadr City neighborhood of Baghdad, June 18, 2014.

Baghdad: The violent struggle over Iraq on Saturday consumed cities and towns widely spread over the north and west of the country, with Sunni militants making some gains near a strategic border crossing with Syria.

At the same time, the Sunnis reportedly faced their own challenges. An Iraqi security official and witnesses said a deadly gun battle near Kirkuk had broken out between two of the most powerful Sunni militant groups fighting the Shiite-dominated government. The battle pitted the Islamic State of Iraq and the Levant, which is leading the offensive, against its Baathist allies and left 17 dead, according to the official.

In Baghdad, the day's violence had a more familiar sectarian cast. A bomb exploded in a market in the predominantly Shiite neighborhood of Zafaraniya, killing four shoppers. Three hours later, two men were found dumped nearby, handcuffed and shot to death. The victims were most likely Sunnis since the area is controlled by Shiite militiamen.

In the insurgent-held city of Tikrit, in Salahuddin province, the morgue at the hospital reported that it had received 84 bodies of policemen, soldiers and government employees who had been executed. Seven of them had been beheaded, according to an official there who spoke on the condition of anonymity for fear of angering the militants.

In western Anbar province, two more towns fell to the Islamic State of Iraq and the Levant near the border town of Qaim, which the rebels captured Friday.

A local government leader, Muthana al-Rawi, said the two towns taken Saturday, Ana and Rawah, were captured after troops and police officers fled Qaim and "sleeper cells of the militants showed up to fill the gap and take control."

Witnesses from another border town, Al Waleed, said the Syrian air force had bombed Islamic State of Iraq and the Levant troops on the Iraq side who were trying to capture it as well.

If Al Waleed fell, that would leave the Iraqi government without control of a single border crossing to Syria and would deal a blow to both Syria and Iraq. A loss of control over the border would allow the Islamic State of Iraq and the Levant, which has been fighting the Syrian government for months, to move its fighters and equipment more freely between the two countries.

The militants are trying to create an Islamic caliphate in a vast area of both countries, wiping out the border in between. Syria's reported involvement Saturday was the manifestation of the increasingly convoluted politics surrounding the region. Although the United States argues that President Bashar Assad of Syria must step down, he and the United States now have a shared enemy in the Islamic State of Iraq and the Levant.

Contradicting most reports from the field so far, the Iraqi prime minister's top military spokesman, Gen. Qassim Atta, gave a news briefing Saturday in which he again insisted that the initiative had shifted to Iraqi government forces.

Iraq's second-largest city, Mosul, fell to the militants on June 10, and in the next three days they pushed to within about 60 miles of Baghdad, conquering most of the provinces of Nineveh and Salahuddin, as well as much of Diyala province. In the past week, however, they appear to have concentrated on consolidating their gains, attacking cities and towns on the margin of the territory they overran, but not advancing closer to Baghdad.

The fighting between Sunni militants near Kirkuk, if confirmed, could pose a challenge to the militant coalition, which was able to advance so quickly into Iraq in part because of the combined forces.

According to the security official, who was in Kirkuk and spoke on the condition of anonymity, the Sunnis battling the Islamic State of Iraq and the Levant were from the Men of the Army of Naqshbandia, a group made of former Saddam Hussein loyalists, or Baathists. The two groups are allies of convenience with very different ideologies; the Baathists' nationalistic, Sufi philosophy is completely at odds with the Islamic State of Iraq and the Levant's extreme Islamist beliefs.

The battles reportedly took place in Hawija, one of the strongholds of the Naqshbandia, which was formed by former army officers from the ousted government of Saddam Hussein. The security official said the fighting had broken out when the Islamic State of Iraq and the Levant tried to disarm the Naqshbandia, but a witness from Hawija said they had been fighting over control of gasoline and oil tanker trucks captured from a refinery at Beiji.

The Naqshbandia group has become a major component of the extremist Sunni coalition, at least partly because of its military experience and the Baath Party's deep roots in the Sunni community.

On its website, the Naqshbandia group denied any problems with its allies. "We deny such news, we are in battle only with the occupiers of Iraq (Iran and the government)," the statement said. "It is clear that the government is doing this to get our army in an internal battle that will take us away from our main goal."

In Baghdad, as he has consistently done since the Islamic State of the Iraq and the Levant offensive advanced toward the capital, Atta gave his televised briefing to Iraqi journalists but refused to take any questions.

"We will not let them take any foot of our earth," Atta said. He said the militants had been particularly hard hit by Iraqi airstrikes. "You should see how those ISIS run away when they hear even the sound of our air force," he said, using another acronym for the Islamic State of Iraq and the Levant, which is also called the Islamic State in Syria and Iraq. "It shows they are really afraid."

The general then played a video showing helicopter gunship airstrikes on groups of men running in the streets of Tal Afar who he said were Islamic State of Iraq and the Levant fighters.

In a separate development, President Vladimir Putin of Russia called the embattled Iraqi prime minister, Nouri al-Maliki, and offered Russia's "full support for the Iraqi government's efforts to liberate Iraqi territory from the terrorists' hands as quickly as possible," according to the Kremlin.

Promoted
Listen to the latest songs, only on JioSaavn.com
(Suadad al-Salhy contributed reporting from Baghdad; Iraqi employees of The New York Times from Kirkuk, Baqouba and Tikrit; and Steven Lee Myers from Moscow)

German Floods Cause Up To 5 Billion Euros In Insured Losses: Association