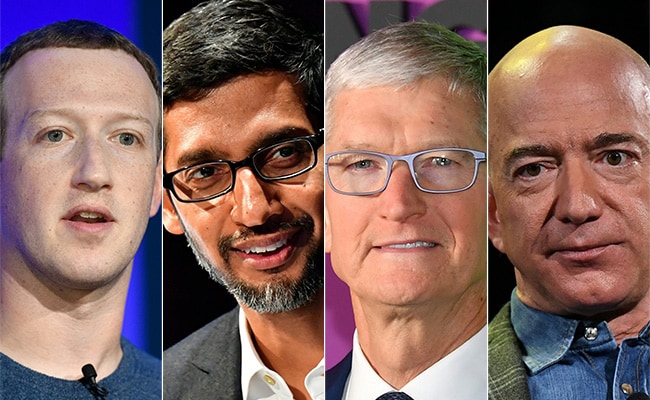 Google, Facebook, Apple and Amazon were criticized for the power they wield over digital markets.

The chief executives of four U.S. technology giants endured withering, rapid-fire questioning for more than five hours from lawmakers who accused their companies of using their power to crush rivals and squash competition.

"These companies as they exist today have monopoly power," said Representative David Cicilline of Rhode Island, who is leading a yearlong House investigation into the companies. "Some need to be broken up, all need to be heavily regulated," Cicilline said as he adjourned the hearing after it stretched into the evening.

The chief executives of the four companies -- Alphabet's Sundar Pichai, Facebook's Mark Zuckerberg, Apple's Tim Cook and Amazon's Jeff Bezos -- testified before the House antitrust committee from remote locations. They were unfailingly polite, even though lawmakers frequently cut them off because of a rigorously enforced five-minute rule per member. Lawmakers peppered the executives with questions about specific examples intended to show the companies have thwarted competitive threats.

The hearing marked an escalation of antitrust scrutiny in the sector, with the internet platforms, which have a combined value of nearly $5 trillion, already under investigation by the U.S. Federal Trade Commission and the Justice Department. States across the country are also probing Facebook and Google. The testimony and documents produced by the panel could be used to inform those inquiries. The lawmakers uncovered several potentially damning examples of anti-competitive behavior.

"It could be a watershed moment," said Alex Petros, policy counsel of left-leaning think tank Public Knowledge, which advocates for stronger antitrust enforcement. "This could put pressure on both the DOJ and FTC to really conduct full investigations."

Cicilline, who said he expects the committee to complete its report in a month, attacked Pichai over the practices of his Google unit's search engine, accusing it of stealing content with the goal of keeping users on its site, rather than directing them to other sources on the web.

"The evidence seems very clear to me as Google became the gateway to the internet it began to abuse its power," he said. "It used its surveillance over web traffic to identify competitive threats and crush them." Any business that wants to be found on the web, he added, "must pay Google a tax."

Democrats split up their questions to focus on the market power of Google, Facebook, Amazon and Apple, while Republicans largely complained about anticonservative bias at Google and Facebook.

"I'll just cut to the chase: Big tech is out to get conservatives," he said. "That's not a suspicion, that's not a hunch, that's a fact."

Jerrold Nadler of New York, the Democrat who chairs the House Judiciary Committee, said documents obtained by the committee showed Facebook bought Instagram in 2012 to "neutralize" an emerging competitor. He asked why Instagram shouldn't be broken off from Facebook.

"Facebook saw Instagram as a threat that could potentially siphon business away from Facebook," Nadler said. "And so rather than compete with it, Facebook bought it. This is exactly the type of anti-competitive acquisition that the antitrust laws were designed to prevent."

Zuckerberg said Instagram faced many competitors at the time and that Instagram succeeded because of Facebook's investments.

Cicilline also targeted Facebook over content on its platform, saying the company has an incentive to carry misinformation, hate speech and violent content because it drives the most engagement and therefore is more profitable. Zuckerberg disputed that claim, arguing it's not what users want to see.

"Facebook gets away with it because you're the only game in town," he said. "There's no competition forcing you to police your own platform. Allowing this misinformation to spread can lead to violence, and frankly I believe it strikes at the very heart of American democracy."

Democrat Pramila Jayapal of Washington questioned Bezos on Amazon's use of data about third-party sales to compete against those vendors. Bezos said the company has a policy against using seller-specific data to aid its private-label business, but "can't guarantee the policy has never been violated."

"You have access to data that far exceeds the sellers on your platform with whom you compete," Jayapal said. "You can set the rules of the game for your competitors but not actually follow these same rules for yourself." Media reports found that policy had been violated.

Representative Lucy McBath, a Georgia Democrat, played the recording of an Amazon bookseller who said as the business grew and took market share from Amazon, it retaliated and blocked the business from selling textbooks. Amazon has so much power that sellers have no other place to go, McBath said.

"If Amazon didn't have monopoly power over these sellers, do you think they would choose to stay in a relationship that is characterized by bullying, fear and panic?" she said.

Bezos said he wasn't familiar with the bookseller's case and wanted to learn more about it. He insisted that Amazon has been good for third-party sellers.

In written testimony released late Tuesday, the CEOs told Congress that competition is thriving across the tech industry and consumers are benefiting as a result.

"The global retail market we compete in is strikingly large and extraordinarily competitive," Bezos said in his statement. "Unlike industries that are winner-take-all, there's room in retail for many winners."

They touted the various ways they help small businesses grow, whether third-party sellers on Amazon or independent developers that build apps for the Apple App Store. They also portrayed their companies as embodying American entrepreneurship.

Cicilline said after the hearing that many of the responses from the CEOs confirmed things the panel had learned during its inquiry. He said it was important to hear from some of the CEOs "an acknowledgement of some of the anticompetitive practices that are really at the heart of this investigation."