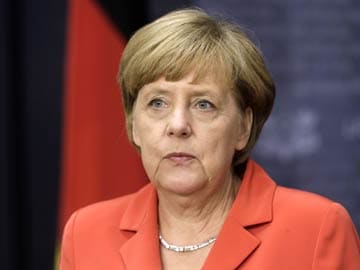 The visit by Merkel -- the most influential Western leader to call on Kiev since the crisis erupted in the ex-Soviet state -- came ahead of crunch talks Tuesday between Poroshenko and Russian President Vladimir Putin alongside top EU officials.

Tensions surged on Friday when Russia sent scores of trucks it said were carrying aid to the stricken insurgent stronghold of Lugansk in an unauthorised move Kiev described as a "direct invasion".

During her visit to Kiev, Merkel called for a "bilateral ceasefire and effective border controls" to help stop four months of brutal fighting between pro-Russian rebels and government troops.

And, in a show of support for Kiev's pro-Western leaders, she said the "territorial integrity and well-being of Ukraine is essential".

She also warned Russia -- already under punishing EU and US sanctions over its alleged meddling in Ukraine -- of further punitive measures.

"We cannot rule out thinking about further sanctions if things do not progress," she told journalists.

Poroshenko said the "time has come for peace" in the war-torn east, but ruled out sacrificing Ukraine's sovereignty to end a conflict that has cost more than 2,200 lives.

"Ukraine along with our European partners and the whole world will do everything for this to happen but not at the expense of the sovereignty, territorial integrity and independence of Ukraine," he said.

Ukraine, a former Soviet republic, will mark the 23rd anniversary of its Declaration of Independence with a military parade in Kiev Sunday, in spite of the fighting still going on in the east.

Events in the capital start at 0700 GMT.

Deadly fighting has intensified on the ground as Ukraine presses on with a punishing push into dwindling rebel-held territory in a bid to deal a knockout blow to the struggling insurgents.

The European Union and the United States have slapped the toughest sanctions on Moscow since the Cold War over its alleged support for the rebels, a move that led Russia to ban agricultural products from much of the West.

Russia has consistently denied arming the rebels and has demanded Ukraine halt its punishing military operations.

It sent in the column of white trucks on Friday despite failing to get approval for a shipment it says was aimed solely at helping besieged civilians in Lugansk, who have been without water and power for weeks.

The West sharply rebuked Russia over the convoy, with Washington describing it as a "dangerous escalation" and warning Moscow it could face further sanctions.

Kiev and the West feared the shipment could be used to bolster the struggling rebels or provide Moscow with a pretext to stage a full-scale intervention, with NATO suggesting there had been a "major escalation" in Russian military involvement in eastern Ukraine this month.

Russia insisted the trucks were carrying around 1,800 tonnes of aid including food, water, medicine and electrical generators, but there was no way to independently verify this.

An observer for the Organisation for Security and Cooperation in Europe (OSCE) at the border told AFP that the Russian trucks had all returned by around 1000 GMT.

In a phone call to Poroshenko on Saturday, US Vice President Joe Biden commended "Ukraine's restraint in the face of Russia's blatant provocation and disregard of Ukraine's sovereignty", according to a White House statement.

But in a reminder of the toll the conflict is taking on ordinary people, AFP saw the bodies of six civilians, including a child, killed by shelling sprawled on the streets of two neighbourhoods of the main rebel stronghold of Donetsk on Saturday.

Local authorities said Donbass Arena, a shiny new Euro 2012 venue in Donetsk where Ukraine's top football team Shakhtar Donetsk was based before moving out due to the conflict, was hit by shelling for the first time since the crisis began.

More than 400,000 people are estimated to have fled the conflict in the east since April.

Promoted
Listen to the latest songs, only on JioSaavn.com
Analysts said Merkel's visit aimed to shore up EU support for Kiev in the run-up to the Poroshenko-Putin meeting in the Belarussian capital of Minsk on Tuesday, as they run the risk of Moscow exploiting differences between the two sides.

German Vice Chancellor Sigmar Gabriel has said that establishing a federal Ukraine would be the only "viable path" to ending the crisis, a statement likely to set off alarm bells in Kiev, where such ideas have been fiercely opposed.