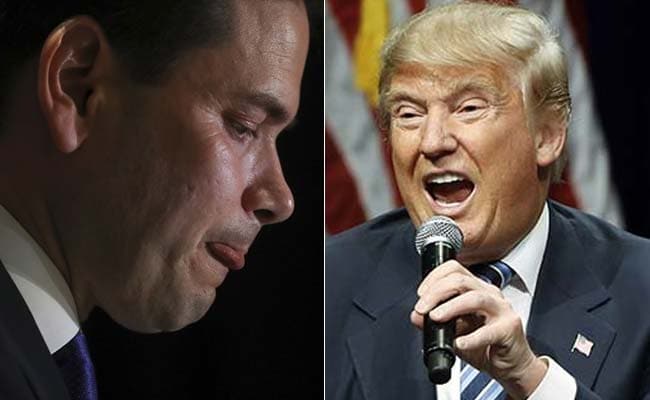 Over the course of his presidential bid, Sen. Marco Rubio called Donald Trump a "con man" who was "dangerous" and unqualified to control the nation's nuclear codes. He ridiculed the businessman's manhood and warned Trump would "fracture" the Republican Party if he were the nominee.

By March - a few days before Rubio dropped out - the senator from Florida said with a cracking voice that it was "getting harder every day" to envision supporting his rival.

But now Rubio is on board, saying that he plans to attend the Republican National Convention in Cleveland and that he would be "honored" to help Trump however he can.

Long a star of the mainstream conservative movement, Rubio is one of the starkest symbols of the GOP's rapid capitulation to Trump. Nearly every prominent Republican - from lawmakers to governors to former White House officials - has acquiesced as polling shows Trump's support building.

Rubio's shift also comes as GOP leaders are pushing him to reconsider his decision not to seek reelection to the Senate. Rubio has said "maybe" he would run, with conditions.

Trump thanked Rubio indirectly by issuing a tweet Thursday night supportive of a bid: "Poll data shows that @marcorubio does by far the best in holding onto his Senate seat in Florida. Important to keep the MAJORITY. Run Marco!"

The words are a remarkable about-face for Trump, who spent months during the campaign deriding "Little Marco" as a dishonest lightweight who was "a disaster for Florida" and who "couldn't get elected dogcatcher."

Many of Rubio's supporters were outraged by his support for Trump, saying they felt betrayed by a 44-year-old politician who had campaigned as a young representative of a more optimistic, inclusive GOP. He was so opposed to Trump at one time that his presidential campaign even sold "Never Trump" gear. The latest shift adds to Rubio's reputation as a shape-shifter who abandoned his own immigration reform bill when it became unpopular among conservatives.

Bryan McGrath, a Hudson Institute fellow who advised Rubio's campaign on defense issues, noted that Rubio had explicitly said Trump could not be trusted with the nuclear arsenal.

"He said all the things I was thinking and all the reasons I remain dubious about Trump being the president," McGrath said in an interview Friday. "So to see him bend a knee, it just bothers me and just reinforces the thing that's getting Trump elected in the first place: the sense that politicians don't tell the truth or are capable of switching on a dime if it looks like it's good for them."

Rubio responded to the criticism with a series of Twitter messages: "If you can live with a Clinton presidency for 4 years thats your right," he wrote in one. "I cant and will do what I can to prevent it."

The move came after several phone calls between Rubio and Trump in recent weeks, according to people familiar with their interactions. Some of Trump's children also reached out to woo Rubio, these people said.

In the CNN interview, portions of which were released Thursday and Friday, Rubio said he would speak on Trump's behalf if the candidate asked.

"I don't want Hillary Clinton to be president," Rubio said. "If there's something I can do to help that from happening, and it's helpful to the cause, I'd most certainly be honored to be considered for that."

He shrugged off questions about his deep policy differences with Trump, who, among other things, has called for the deportation of an estimated 11 million illegal immigrants in the United States. "Look, my policy differences with Donald Trump - I spent 11 months talking about them. So I think they're well understood," Rubio said.

Supporters in Florida said that Rubio's moves reflect political reality in his state.

"If you are a Republican leader, I think that's what you have to do. Period," said Ninoska Perez Castellon, the host of a popular talk show on Miami's Radio Mambi and a friend of the senator since his days as a West Miami city councilman. "You might not be happy with who the candidate is, but that's the right thing to do."

While Trump easily won the Florida GOP primary in March, Rubio prevailed in his home county of Miami-Dade with the support of Cuban American voters. Months later, attitudes have shifted.

"Everyone in the room was on board," Diaz said. "When I said we need to unite, everyone was in agreement. There were about 100 local leaders in the room. Not a single person disagreed. Everyone stood up and clapped."

Many of Trump's former rivals, including New Jersey Gov. Chris Christie and retired neurosurgeon Ben Carson, have endorsed him, but others have not. Former GOP presidential nominee Mitt Romney remains firmly opposed to Trump and has been involved in talks about finding a third-party challenger. Members of the Bush family - including former Florida governor Jeb Bush, who ran against Trump for the nomination - are not expected to support Trump. House Speaker Paul D. Ryan (R-Wis.) reiterated this week that he was not yet ready to endorse him.

On Friday, Sen. Ted Cruz, R-Texas, - another former Trump rival - told an Oklahoma radio station that "I am looking and listening to see what the candidates do."

As Rubio was back in Florida meeting with Venezuelan college students Friday, prominent party officials were pushing him to reconsider his plans to leave the Senate.

The state's popular chief financial officer, Jeff Atwater, who almost ran for Rubio's seat, told the Tampa Bay Times that the senator should "pull aside some quiet time and contemplate" running again.

"He would be the best candidate to prevail," Atwater said.

Brian Ballard, a well-connected Tallahassee GOP lobbyist, said that Rubio is "by far our best chance to hold the seat."

The aggressive push to recruit Rubio went public this week when one of the top political advisers to Senate Majority Leader Mitch McConnell, R-Kentucky, took to social media to encourage Rubio. The orchestrated effort included calling on him to run during the Republican senators' weekly closed-door luncheon and a public letter from Sen. Bob Corker, R-Tennessee, head of the Foreign Relations Committee, on which Rubio serves.

None of the five Republicans running to succeed Rubio enjoys his level of name identification, Corker said. He also said they would need roughly $50 million to mount a serious bid in the coming months.

Democrats dismissed Rubio on Friday as "a terrible fallback option" for Republicans, saying that he has taken positions on abortion, domestic violence and the economy during his presidential bid that would make him unpopular with Florida voters.

"Rubio spent months making clear how much he disliked his current job while he asked voters for a promotion, and it would be a tall order to convince voters they should send him back," the Democratic Senatorial Campaign Committee said in a statement.

In the CNN interview, Rubio said he would not run again because his longtime friend Florida Lt. Gov. Carlos Lopez-Cantera is one of those vying to succeed him.

Would Rubio reconsider if Lopez-Cantera dropped out?