An Entire Generation Of A City's Lawyers Was Killed In Pakistan 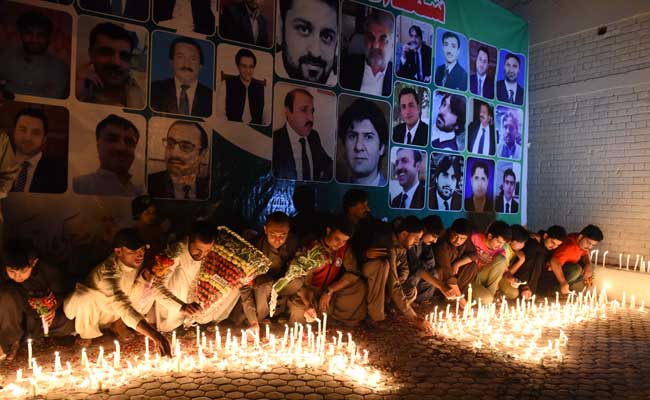 Baluchistan is a place that desperately needs lawyers.

Pakistan's largest province by area, it is the home of a decades-old separatist insurgency, fueled by real grievances over neglect and lack of political representation. It is also increasingly the target of Sunni extremists, who bomb and kill its Shiite minorities. What leaders the province has are widely considered corrupt. Dozens of local journalists have been kidnapped in the past few years. It is nearly impossible for foreign reporters to enter Baluchistan. Lawyers are almost all that give the province a semblance of justice.

About 60 of them were killed in one attack on Monday in Baluchistan's capital, Quetta. They were packed into an emergency room where the body of another slain colleague lay, riddled with gunshot wounds. A widely circulated video showed lawyers milling about the hospital before an enormous explosion. A Pakistani Taliban offshoot claimed the attack, as did the Islamic State, though analysts say the latter's claim is dubious.

A week earlier, another lawyer was fatally shot. In June, the principal of the province's law college was, too.

A generation of lawyers has been wiped out in Quetta, and it will leave Baluchistan, in more ways than one, lawless.

On Tuesday, the Pakistani bar association called for an indefinite boycott of the courts. But so few lawyers are left in Baluchistan that it will be years, probably, until its legal community recovers.

The global response has been muted. Ban Ki-moon, Hillary Clinton and other international figures issued brief, tired statements. Pakistan's leaders did much the same. No officials have been held responsible for the security breakdown at what should have been a highly guarded scene. The website of Dawn, Pakistan's most reputed English-language newspaper, had only a day-old story and photo gallery about the attack on its homepage on Tuesday evening.

Barkhurdar Khan, a member of the Baluchistan Bar Council, was one of the few lawyers who survived the attack. He has practiced in Quetta for nine months. After the attack, Khan offered his singular perspective in a heartrending stream of posts on social media.

"All, I repeat ALL Senior practicing lawyers and Barristers died today," he wrote. "The number of junior lawyers, who are the sole bread winners of their homes and who are now unemployed runs into hundreds."

"Most of those who died were first gen educated. The scenes of misery and loss cannot be put into words. The bent shoulders of their fathers, the broken backs of their brothers. Their kids, still oblivious to their own loss, playing and hoping," Khan continued. "Every lawyer that has ever given me a lift home is dead, except for one, Naveed Qambrani, he is critical and was airlifted to Karachi."

"Heart wrenching is an understatement.

(This story has not been edited by NDTV staff and is auto-generated from a syndicated feed.)
Comments
Pakistan attackBombing in PakistanLawyers Killed In Pakistan