Hotter, drier conditions over the past four decades are decreasing the body size of the rainforest's birds while increasing their wingspans, a study published in the journal Science Advances said. 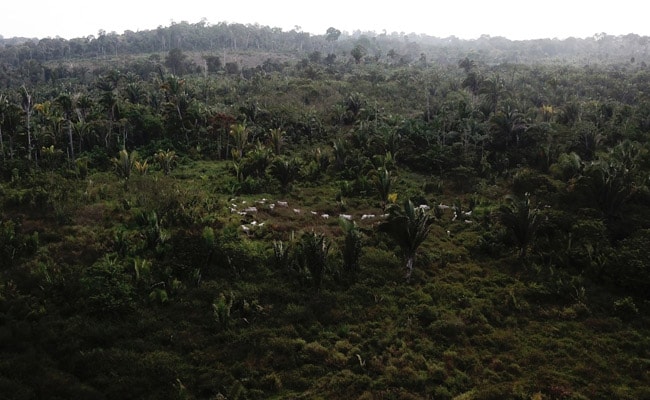 Most species lost an average of two percent of body weight every decade. (File)

Even the wildest parts of the Amazon untouched by humanity are being impacted by climate change, according to new research.

Hotter, drier conditions over the past four decades are decreasing the body size of the rainforest's birds while increasing their wingspans, a study published in the journal Science Advances said Friday.

The changes are thought to be a response to nutritional and physiological challenges, especially during the June to November dry season.

"The biggest takeaway for me is that this is happening far from direct human disturbance, such as deforestation, in the heart of the world's biggest rainforest," Vitek Jirinec, an ecologist at the Integral Ecology Research Center and the paper's lead author told AFP.

"That is something to ponder on the last day of COP26," he added.

Jirinec and colleagues analyzed data collected on more than 15,000 birds that were caught, measured, weighed, and tagged over the course of 40 years of field work.

They found that nearly all the birds had become lighter since the 1980s.

Most species lost an average of two percent of body weight every decade, meaning a bird species that would have weighed 30 grams in the 1980s would now average 27.6 grams.

The data was not tied to a specific site but rather collected from a large range of the rainforest, meaning the phenomenon is ubiquitous.

In all, the scientists investigated 77 species whose habitats ranged from the cool, dark forest floor to the sunlit and warmer midstory -- the forest's middle layer of vegetation.

The birds at the highest sections of the midstory, which fly more and are exposed to heat for longer, had the most pronounced changes in body weight and wing size.

The team hypothesized this was an adaptation to energy pressures -- for example decreased availability of fruit and insect resources -- and also to thermal stress.

"There's good theoretical reasoning why a smaller size is beneficial under climate warming -- you can cool yourself better -- but the larger wings are more difficult to explain," said Jirinec.

"That's why we proposed the 'wing loading' hypothesis," he added.

Longer wings, and a reduced mass-to-wing ratio, produce more efficient flight -- similar to how a glider plane with a slim body and long wings can soar with less energy.

Jirinec added that the study was not designed to tell whether these differences were driven by natural selection resulting in genetic changes, or whether they were the result of different growth patterns based on available resources.

Both are possible, "but there's good evidence that evolution can happen over short intervals," he said. A confirmed example of rapid evolution is the recent emergence of tuskless African elephants, which are poached for their ivory.

The Amazon birds "are fairly fine-tuned, so when everyone in the population is a couple of grams smaller, it's significant," added co-author Philip Stouffer of Louisiana State University, in a statement.

How well they deal with increasingly hotter and drier conditions in the future remains an open question.

The team behind Friday's paper last month published a study showing a dramatic decline in sensitive bird species in the Amazon owing to a warming climate -- particularly those that dwell on forest floor where they forage for insects.

The authors believe other species across the world are likely to be facing similar pressures that have not yet been documented.

"This is undoubtedly happening all over and probably not just with birds," Stouffer said.