Bernie Sanders returned to campaign trail for the US Presidential election following a heart attack earlier this month. 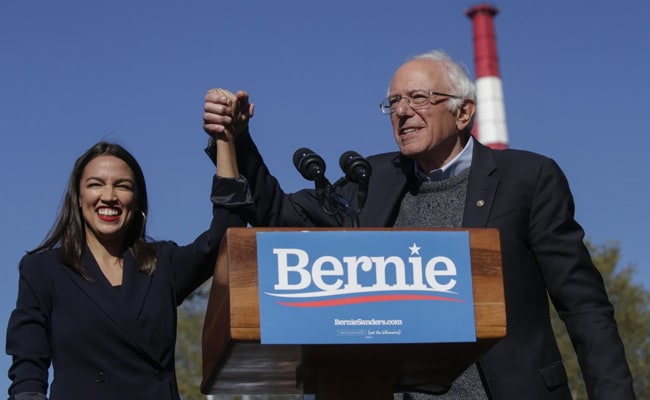 "I call him 'tio Bernie'," Ocasio-Cortez, 30, said at the rally in her Queens, New York constituency that Sanders said drew some 20,000 people.

"Tio" means "uncle" in Spanish, the language of Puerto Rico where Ocasio-Cortez has roots.

She is the youngest House of Representatives member and considers herself a "Democratic socialist," as does Sanders who has been in Congress since 1991.

"We right now have one of the best Democratic presidential primary fields in a generation, and much of that is thanks to work that Bernie Sanders has done in his entire life," Ocasio-Cortez said.

The Democratic primary field consists of 19 candidates, 12 of whom took part in a debate on Tuesday. Sanders is running third in polls behind Joe Biden and Elizabeth Warren.

Battling to catch up in the polls with Warren, the Sanders campaign is hoping for a boost from the show of support -- and also to ward off concerns about his health.

"I am more than ready, more ready than ever, to carry on with you the epic struggle that we face today," Sanders said when he took the stage.

Both women are members of what they call "The Squad," an outspoken, leftist group of four rookie, youthful and racially diverse congresswomen whom the president has accused of hating America.

Earlier this year, he told them to "go back" to other countries -- though they are all US citizens.

"The only reason that I had any hope in launching a long-shot campaign for Congress is because Bernie Sanders proved that you can run a grassroots campaign and win," Ocasio-Cortez said in her speech.

Sanders, 78, is known for consistently refusing political financing from corporations.

"When I was a waitress, and when it was time for me to graduate college with student debt, Bernie Sanders was one of the only ones that said no person should be graduating with life-crushing debt," Ocasio-Cortez said in an impassioned speech.

Yet some of Sanders's supporters acknowledged that his heart attack has them considering other options.

"I know that the Warren campaign at least would provide an alternative, even while I don't think she represents all of the values that I have," Romeo Lemba, a 28-year-old engineer in the solar panel industry, told AFP.

The support from the two lawmakers comes as Sanders tries to woo younger and more racially diverse backers. He's won the endorsement of rap artist Cardi B, who is from the Bronx, another New York borough that Ocasio-Cortez's congressional district partially comprises.

Omar, 38, the first black Muslim woman elected to Congress, said earlier this week in her endorsement of the Jewish Sanders that "Bernie is leading a working-class movement to defeat Donald Trump that transcends generation, ethnicity and geography."

The first round of voting to select a Democratic White House candidate will take place in February, in Iowa.