The third summit between the North's leader Kim Jong-Un and South Korean President Moon Jae has been announced for September 18-20. 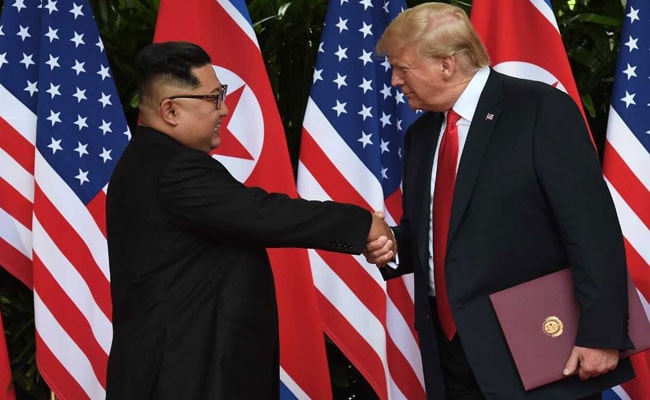 The leaders of the two Koreas will hold a summit in Pyongyang in September, Seoul said Thursday, as Kim Jong Un renewed his commitment to the denuclearisation of the flashpoint peninsula.

The announcement of the September 18-20 summit -- the third between the North's leader Kim and South Korean President Moon Jae-in this year -- comes as US efforts to dismantle Pyongyang's nuclear arsenal have stalled.

Chung on Wednesday flew to Pyongyang where he handed over a personal letter from Moon to Kim, as Seoul seeks to kick-start the diplomacy that led to the landmark June summit between US President Donald Trump and the North Korean leader.

The two pledged to denuclearise the Korean peninsula at the Singapore meeting but no details were agreed, and Washington and Pyongyang have sparred since on what that means and how it will be achieved.

However, in his meeting with Chung, Kim renewed his commitment to that goal, North Korean state media said Thursday.

The two Koreas "should further their efforts to realise the denuclearisation of the Korean peninsula", Kim was quoted as saying by KCNA.

"It is our fixed stand... to completely remove the danger of armed conflict and horror of war from the Korean peninsula and turn it into the cradle of peace without nuclear weapons and free from nuclear threat."

The pledge comes after Trump, frustrated with a lack of progress on disarmament, last month cancelled Secretary of State Mike Pompeo's trip to Pyongyang after the North reportedly sent a belligerent letter to the US leader.

But Pyongyang has slammed the Washington for its "gangster-like" demands for complete, verifiable and irreversible disarmament.

Kim emphasised that his "trust in Trump remains unchanged" despite the difficulties, Chung said, and expressed his intention to work closely with the US to achieve denuclearisation "in the first official term of President Trump."

But the North Korean leader also expressed a "sense of frustration" with the international community for not appreciating what he called Pyongyang's "very significant and meaningful" steps, Chung said.

Kim noted the North had dismantled its nuclear test site in Punggye-ri, where nuclear tests "have been made impossible for good", according to the South Korean envoy.

"Chairman Kim asked us to convey the message to the US that the US (should) help create situations where he would feel his decision to denuclearise was a right move", Chung said.

Chung also conveyed a message from Trump to Kim, a presidential spokesman said, without elaborating.

The upcoming summit between Kim and Moon may help break the months-long deadlock after the Singapore summit, said Lim Eul-chul, professor at Kyungnam University's Graduate School of North Korean Studies.

"There is a still big gap between what the North considers sufficient goodwill gestures, like destroying its missile test stand or a nuclear test site, and what the US wants, including on-site verification by experts," he said.

Narrowing the gap and rebuilding trust between Kim and Trump is key in the dialogue -- if any -- ahead, he said, adding Kim would seek to send more reconciliatory messages to Trump through Moon in September.

North Korea has demanded that Washington agree to formally end the 1950-53 Korean War, and accused it of failing to reciprocate "goodwill measures".

But American officials and conservatives in the South are concerned such a declaration would weaken the US-South Korea alliance and deprive the 28,000 US forces stationed on the peninsula of their deployment rationale.

Kim dismissed such worries, Chung said, and told the South Korean delegation that a formal end of the Korean War would not be linked to the withdrawal of the US troops.

Professor Yang Moo-jin of the University of North Korean Studies said Kim sees the US agreeing to a formal end to the war as a "litmus test" to determine whether Washington is sincere in moving forward.

"But the US... does not seem to be ready to accept the North's demand", he told AFP.