The nuclear-powered warship, leading a carrier strike group, was conducting what the U.S. military called routine training in the disputed South China Sea on Tuesday, headed for a port call in the Philippines, a defence treaty ally. 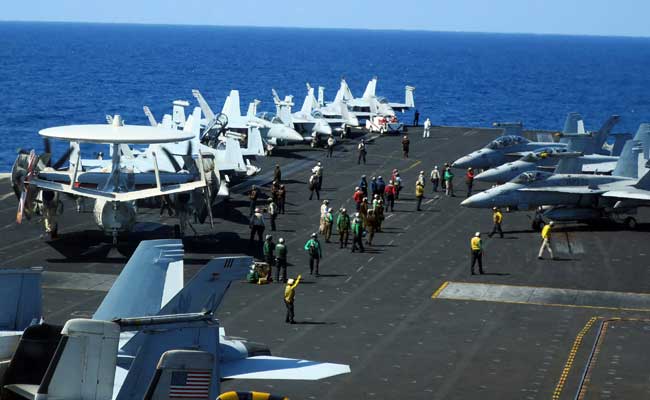 South China Sea: In a span of 20 minutes, 20 F-18 fighter jets took off and landed on the USS Theodore Roosevelt aircraft carrier, in a powerful display of military precision and efficiency.

The nuclear-powered warship, leading a carrier strike group, was conducting what the U.S. military called routine training in the disputed South China Sea on Tuesday, headed for a port call in the Philippines, a defence treaty ally.

The United States is not alone in carrying out naval patrols in the strategic waterway, where Chinese, Japanese and some Southeast Asian navies operate, possibly increasing tensions and risking accidents at sea. 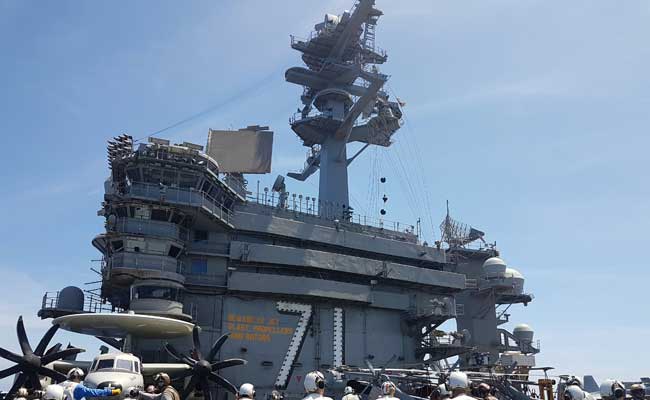 "We have seen Chinese ships around us," Rear Admiral Steve Koehler, the strike group commander, told a small group of reporters on board the three-decade-old carrier.

"They are one of the navies that operate in the South China Sea but I would tell you that we have seen nothing but professional work out of the ships we have encountered."

Navies in the western Pacific, including China and nine Southeast Asian countries, have been working on a code of unexpected encounters (CUES) at sea to avoid conflict. 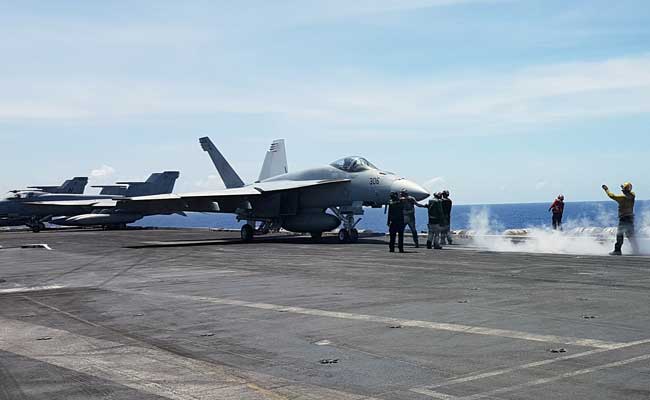 The USS Theodore Roosevelt's presence in the South China Sea comes days after China's massive air and naval drills in the area, in what some analysts described as an unusually large display of Beijing's growing naval might.

China's growing military presence in the waters has fuelled concern in the West about Beijing's end game.

The United States has criticised China's apparent militarisation of manmade islands and carried out regular air and naval patrols to assert its right to freedom of navigation in stretches of a sea China claims largely as its own.

"This transit in the South China Sea is nothing new in our planning cycle or in a reaction to that. It is probably by happenstance that all that is happening at the same time," said Koehler, who gave a tour of the carrier to Philippine military officials and watched flight operations aboard the 100,000-tonne warship.

"All of the operations that we do in and around the South China Sea or any of the bodies of water we operate in, there is a function of international law and that is ultimately what we want to recognise," Koehler said.

Tension between the United States and China over trade and territory under U.S. President Donald Trump has been stepped up of late, with fear in the region that the South China Sea, vital to global trade, could one day become a battleground between the two rival powers. 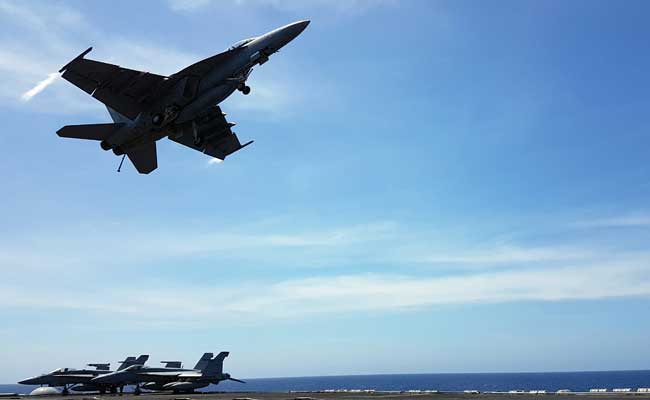 Philippine ties with China have meanwhile warmed under President Rodrigo Duterte, who has put aside disputes with Beijing and wants it to play a key role in building and funding urgently needed infrastructure, from highways and ports to railways and power plants.

China has long objected to U.S. military operations off its coasts, even in areas Washington insists are free to international passage.

"They (China) certainly have the right to exercise off their coast like we do, nor are they necessarily in charge of our transit cycle, but our deployment's been planned," Koehler said.

As the crew in colour-coded uniforms raced to service dozens of aircraft taking off and landing, "handlers" in the flight deck control made sure the deck had enough room for jets to manoeuvre and refuel with the help of a "Ouija board".

The board has all the models of each aircraft, which are marked with squadron name, model, make, and number of personnel. At any given moment, the flight deck is home to dozens of aircraft and helicopters.

"It is a showcase of the capability of the U.S. armed forces," Philippine army chief Rolando Bautista said of the demonstration.

"Since Americans are our friends in one way or another, they can help us deter any threat."

Promoted
Listen to the latest songs, only on JioSaavn.com
(Editing by Martin Petty and Nick Macfie)
© Thomson Reuters 2018