Hundreds of demonstrators booed Johnson through Luxembourg City's medieval streets, denouncing his plans to steer the country out of the European Union on Oct. 31

British Prime Minister Boris Johnson boasted ahead of Monday Brexit talks that he was like the Incredible Hulk, who gets stronger when he gets angrier. But it was European fury that was on display.

Hundreds of demonstrators booed Johnson through Luxembourg City's medieval streets, denouncing his plans to steer the country out of the European Union on Oct. 31, with or without a transition deal to ease the way.

The protests were intense enough that Johnson canceled his half of a planned news conference alongside Luxembourg Prime Minister Xavier Bettel.

And so the enduring image of the day was Bettel gesturing to an empty podium, while suggesting that Johnson had deceived the British public during the 2016 Brexit campaign and now was holding Europe's future "hostage for party political gains."

"Before Brexit," Bettel said, "people said to some voters that they will get money back from social insurance, that Brexit will be done in 24 hours and everything will be good.... No one was able to say, 'Sorry, this is a lie.' "

EU leaders have been sensitive to the idea that Johnson is laying the groundwork to blame them for the failure of Brexit. Bettel preemptively pushed back: "Now it's on Mr. Johnson - he holds the future of all U.K. citizens and every EU citizen living in the U.K. in his hands. It's his responsibility." 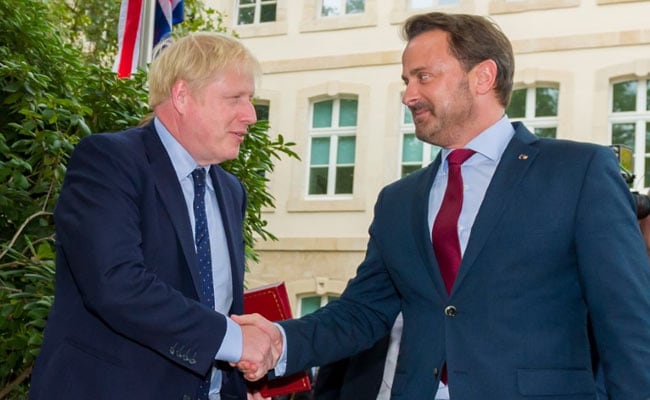 Boris Johnson backed out of the press conference over booing by demonstrators. (AFP)

"We need written proposals and time is ticking. So stop speaking and act," Bettel said.

Johnson later told Sky News that he had bowed out of the news conference because, "I don't think it would have been fair to the prime minister of Luxembourg. I think there was clearly going to be a lot of noise, and I think our points might have been drowned out."

A spokesman for 10 Downing Street said British officials had sought to move the session indoors. But the Luxembourgish side said they didn't have any space that could accommodate all the reporters.

Some of Johnson's allies chafed at how he was treated.

"The Luxembourg PM chose to go ahead with what was, in effect, an anti-Brexit rally rather than a news conference," tweeted Conservative lawmaker Daniel Hannan. "Petty but calculated gestures of this kind from Euro-federalists pushed Britain into wanting to leave in the first place."

Johnson got a gentler reception on Monday from European Commission President Jean-Claude Juncker, a backslapping politician of the old school.

In their first meeting since Johnson became prime minister in July, the two dined on soft-boiled organic eggs and butter-roasted pollock with risotto.

Juncker called the lunch "friendly" and said "negotiations will continue at high speed." Though he made clear that there had been little progress.

A Downing Street readout of the lunch said Johnson "reiterated that he would not request an extension" beyond the scheduled Oct. 31 Brexit date.

But a law passed by the British Parliament mandates that he request a delay until at least Jan. 31 if no transition deal has been agreed before mid-October. So Johnson's continued insistence raises questions about whether he is bluffing - or preparing to defy British law.

Johnson also faces a court challenge this week over his decision to suspend Parliament. A Scottish court ruled that he has unlawfully hindered lawmakers at a critical moment - and misled the queen on his rationale. An English court, however, dismissed the matter as political rather than legal. The Supreme Court in London will hear the combined cases on Tuesday.

Johnson seems to be calculating that fears of the economic consequences of a no-deal Brexit will drive EU leaders to make concessions at a last-call summit that begins Oct. 17.

But EU policymakers say they cannot grant Johnson what he is asking.

The talks are stuck on how to keep the border open between Ireland, which is staying in the EU, and Northern Ireland, which would leave along with the rest of the United Kingdom. Officials on both sides of the border fear that if any border controls are imposed, it could reignite sectarian violence quelled by the 1998 Good Friday Agreement.

Johnson is seeking a way to keep Northern Ireland partly aligned with EU regulations to avoid a hard border with Ireland, but EU negotiators have said that his proposals are not specific enough to negotiate in earnest.

"The European Union is always to ready to negotiate with a proper proposal from the United Kingdom side," Finnish European Affairs Minister Tytti Tuppurainen said Monday. "So far, I haven't seen any proposal that would compensate" for current insurance plans to keep the border open, she said.

Johnson's comparison of himself to the Incredible Hulk super hero from movies and comic books drew dismay from European policymakers, who said it was unlikely to help reach a deal.

The British leader told the Mail on Sunday that Britain would be like Bruce Banner, the mild-mannered physicist who can transform into the Hulk when angered.

"Banner might be bound in manacles, but when provoked he would explode out of them," Johnson said. "Hulk always escaped, no matter how tightly bound in he seemed to be - and that is the case for this country. We will come out on 31 October and we will get it done."

EU policymakers shot him down.

"Even to Trumpian standards, the Hulk comparison is infantile. Is the EU supposed to be scared by this?" Guy Verhofstadt, a Belgian lawmaker who is leading Brexit negotiations inside the European Parliament, wrote on Twitter.

And so did Mark Ruffalo, the actor who currently plays the Hulk in the movies.

"Boris Johnson forgets that the Hulk only fights for the good of the whole," Ruffalo tweeted. "The Hulk works best when he is in unison with a team, and is a disaster when he is alone."

(Except for the headline, this story has not been edited by NDTV staff and is published from a syndicated feed.)
Comments
Boris JohnsonLuxembourg