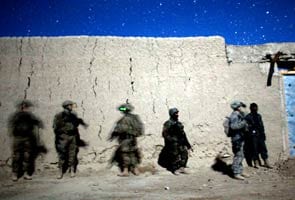 Kabul: Midway through December, Afghan police officers arrested a man who had hidden a fake bomb near a government office in Miri, a village in eastern Afghanistan. The man, who gave the name Muhammad Mir, confessed, saying he wanted to gauge the security force's reactions to a Taliban attack, according to American intelligence officials.

A paper found in his pocket, though, proved more significant than evidence of the Taliban's reconnaissance. It was handwritten in Pashto, and when translated here, it revealed a tax-collection ledger of the Islamic Emirate of Afghanistan -- the resurgent Taliban.

Muhammad Alnabi, it showed, had paid the Taliban 1,600 Afghanis, or about $37. Sergeant Akbar had paid 700 Afghanis, and Abdulla Kaka had remitted 6,500, funds for a so-called shadow government to carry on its fight.

The scrap in Mr. Mir's pocket, hinting at both boldness and organization, became one part of a gradually expanding portrait of how the Taliban has organized and fought its guerrilla war in a corner of rural Afghanistan.

The picture is of an underground government by local fighters, organized under the Taliban's banner, who have established the rudiments of a civilian administration to complement their shadowy combat force. They run schools, collect taxes and adjudicate civil disputes in Islamic courts. And when they fight, their gunmen and bomb makers are aided by an intelligence and support network that includes villagers, who signal for them and provide them shelter, and tunnels in which to elude capture or find medical care.

As part of the Obama administration's campaign to subdue a sprawling insurgency and create a durable Afghan government, the military sent thousands of soldiers last year into rural areas under the influence, if not outright control, of the Taliban. One of those task forces, the Third Battalion of the 187th Infantry Regiment, arrived in Miri in September to help establish a government presence in a place -- though it is the official seat of the Ghazni Province's Andar District -- where government had been sporadic for a decade.

The battalion's sense of its enemies is far from complete. Officers say they do not have detailed profiles of most fighting cells. Important questions, including whether outside financing flows to the insurgents in this area, remain unanswered.

But its analysis, built nearly from scratch and revealed through interviews with commanders, soldiers and analysts, nonetheless sketches a tactical, social and visual map of an organization that is at once widespread but rarely seen by outsiders. And it presents an implicit reminder of the difficulties facing the Pentagon's plan to turn over areas like this one, with its determined and deep-rooted insurgency, to Afghan security forces by 2014.

The analysis outlines two distinct elements of Taliban structure: -- a quasi government and the military arm that empowers it.

On one level, the Taliban has firmly re-established its hold over civilian life in rural Ghazni. Even with an American battalion patrolling Andar and the neighboring Deh Yak District each day, the Taliban runs 28 known schools; circulates public statements by leaflets at night; adjudicates land, water-rights and property disputes through religious courts; levies taxes on residents; and punishes Afghans labeled as collaborators.

"There are tangible indicators that a shadow government does exist and has been strong for the past two or three years," said First Lt. Michael D. Marietta, the task force's assistant intelligence officer.

American officers said the Taliban's influence grew in a vacuum: there had been an almost complete absence of government-provided services here since the Taliban were unseated in the American-led invasion of 2001.

"The most common complaint we hear from Afghans," said Lt. Col. David G. Fivecoat, the battalion's commander, "is that we haven't seen the government in 'X' number of years."

On another level, the Taliban fights. Task force analysts estimate that the Taliban can field roughly 400 fighters in Andar and Deh Yak, which have a combined population of perhaps 150,000 people.

The fighters harass Afghan and American forces and pursue a campaign of intimidation against residents who cooperate with, or even acknowledge, the central government. Dressing as civilians, they battle Western forces with a familiar script: using small ambushes and makeshift bombs with minimal risk and conducting the occasional rocket or mortar attack.

They also have a support network, the officers said, of at least 4,000 civilians. The supporters provide food, shelter and part-time help, like passing false information to the Americans and signaling the movements of the battalion's patrols with mirrors or thick plumes of smoke.

Local knowledge has often given the fighters the ability to seemingly disappear, slipping away in canals or village alleys.

On Jan. 20, a squad from C Company was watching escape routes from the village of Maumud, where other soldiers and police officers were searching for weapons.

A check of the entrance to a karez, the traditional underground aqueduct system of the high Afghan steppe, led to the discovery of a Taliban battlefield-aid station deep underground.

Inside the aqueduct's main tunnel, which continued for several hundred yards, the soldiers found soiled sheets, bloodied bandages and intravenous lines, syringes and penicillin -- signs that wounded fighters had recently been treated there.

Unlike in some areas of Afghanistan, the task force officers said, the Taliban fighters of eastern Ghazni appear to be entirely local men.

The battalion has not heard languages typical of foreign fighters in Afghanistan -- Arabic, Uzbek and Urdu, for example -- on intercepted radio messages. Surveillance of how the dead Taliban fighters are treated has consistently pointed to local roots.

"We haven't seen foreign fighters," Colonel Fivecoat said. "We know that because we've killed fighters and followed it through to the funerals. They are all being buried in local villages by their elders."

But external influences are evident in the fighters' command and control. The vast majority of insurgents in Andar and Deh Yak, the officers said, answer to the Quetta Shura -- the organization, led by Mullah Mohammed Omar, that formerly governed Afghanistan.

The intelligence officials also said that there was a small presence in easternmost Ghazni Province of fighters loyal to the Haqqani network, the internationally designated terrorist organization, based in Miramshah, Pakistan, that is aligned with the Taliban.

Some improvised bombs bear signs of being assembled by Haqqanis, or by people who have been trained or supplied by them, Lieutenant Marietta said.

With its local origins and connections, the Ghazni Taliban has been able to intimidate the government and exert influence over the population.

Several American officers said Taliban fighters were largely untroubled by the two districts' small contingent of Afghan police officers, with whom, in some cases, they have brokered under-the-table arrangements.

When the battalion arrived in Deh Yak, it discovered that a police post overlooking the village of Salamanzi had been sold in July by its commander to the Taliban, which had looted it of ammunition, including rocket-propelled grenades.

The outpost has since been re-established as a government position. But suspicions linger. "We have six-man police posts out there in bad areas that never get attacked, and almost every time we go there we get attacked," Colonel Fivecoat said. "So something is going on."

Similarly, last fall, when the Taliban ordered residents not to vote in the parliamentary elections, the officers said, the order had its intended effect. "There are 110,000 people in Andar," said Sgt. First Class Jason S. Werts, the battalion's senior intelligence sergeant. "Three people voted."

The organization's intelligence network has also been effective.

An American sweep of the village of Bashi turned up a detailed terrain model of Forward Operating Base Andar, where the American battalion's headquarters are located. The model, officers said, was accurate -- indicating that the Taliban had informants on the base.

Another sign of the intelligence network's effects emerged in remarks of Afghan police officers working at the re-established outpost in Salamanzi. In interviews, three police officers said that though they lived near the post, they were afraid to go home.

'The Taliban have spies everywhere," said one of the officers, Abdul Wasay.

The same spy network has identified local civilians who have helped American and Afghan troops.

"The guy we had who was willing to give us information about the Taliban is the guy we found dead last week," said Capt. Edward T. Peskie, who commands one of the battalion's companies.

That informant, Abdul Hamid, had been stopped on a dirt road, taken from his vehicle, and shot. An American patrol to the nearby village of Janabad produced no information. Several villagers acted as if they had not heard of the man.

The Taliban's use of hit-and-run tactics has often made it difficult for soldiers to see their foes clearly. But late in December, in the village of Alu Khel, a platoon found dozens of Taliban photographs while searching a compound.

The photos revealed the faces of the fighters, most of them young men. They also included images of small boys, some of whom appeared to be 5 or younger, brandishing assault rifles, rocket-propelled grenade launchers or tactical radios.

These photos included signs of the Taliban's logistical sources. Several images, for example, showed fighters with the distinctive rifle of the Afghan police -- the AMD-65..

NATO began issuing AMD-65s to Afghan police officers in 2006. Their presence in Taliban hands suggests that weapons purchased by the United States had escaped government custody.

Similarly, an examination by The New York Times of 15 captured Taliban rifle magazines found they contained ammunition identical to that purchased by the Pentagon for issue to the Afghan police -- another sign of leakage.

The Taliban's success at obtaining ammunition and weapons has not always been matched with an ability to use them well. At times, the vaunted movement has appeared to be bungling. "They sometimes are not good at the basics," Sergeant Werts said.

In nearly 200 small-arms attacks against the Americans in recent months, the insurgents' bullets have struck only six American soldiers, one fatally, according to the battalion's medical data.

Early last fall, to cite another example, the Taliban fired four 82-millimeter mortar rounds at Forward Operating Base Andar. All four landed within the perimeter walls, including one that crashed through the roof of a tent crowded with American soldiers. But none exploded. Whoever fired them, the soldiers said, forgot to insert their fuses.

Promoted
Listen to the latest songs, only on JioSaavn.com
The officers said they took small comfort in signs of the Taliban's marginal weapons skills. Both sides have spent months assessing each other.

When spring arrives, the officers said, the Taliban in Ghazni will continue the work of their shadow government, including collecting taxes. But the fighters, they said, could follow patterns seen elsewhere when American forces have settled in, and shift toward more improvised bombs.