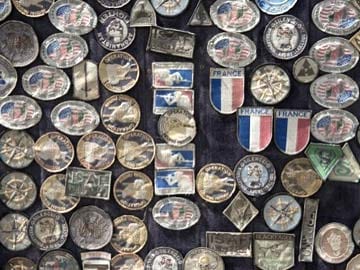 In this photograph taken on May 31, 2014, patches are seen for sale at a bazaar contained within Bagram Airfield some 60 kms north of Kabul

Deh Saqi: The release of a Taliban leader accused of orchestrating industrial-scale carnage in Afghanistan's pristine Shomali plains in 1999, torching homes and carrying out summary executions, has horrified villagers for whom memories of the slaughter are still raw.

Mullah Mohammad Fazl was released from Guantanamo Bay along with four other senior Taliban insurgents - also accused of a litany of abuses - last Saturday in exchange for US army sergeant Bowe Bergdahl, the only American prisoner of war who was held hostage for five years.

The swap has sparked anger and resentment in Shomali villages such as Deh Saqi, which still bear the scars of that cataclysm - charred, ruined and bombed out houses and an anguished generation with a thirst for vengeance.

"Why is the US releasing the enemies of peace, the enemies of Afghanistan?" fumed Mohammad Arif, who fled to the Pakistani city of Peshawar with 18 members of his extended family after the bloody assault, only to return when US-led forces ousted the Taliban from power in 2001.

"The Taliban only know how to kill, maim and plunder. They only know destruction and devastation," said the 53-year-old Afghan farmer, who has struggled to shake off painful memories of the devastation wreaked by a cadre of marauding insurgents.

The Afghanistan Justice Project, an independent research and advocacy organisation, has documented evidence linking Fazl - recognised as the Taliban army chief of staff - to a frightening catalogue of atrocities.

Citing detailed testimonies, it alleges that in the 1999 Shomali assault against Northern Alliance forces led by the late Ahmad Shah Massoud, Fazl presided over carnage on an industrial scale - houses were torched, vineyards and orchards deliberately destroyed, and surrendering fighters summarily executed.

Residents of Deh Saqi, hemmed between shale-brown hills, recall starving villagers were forced to survive for days on mulberry leaves as the Taliban offensive forced the exodus of tens of thousands of civilians.

'Worst of the worst'

Such medieval savagery was unseen even during the Soviet invasion of Afghanistan in 1979, said Arif.

"It was a massacre," he said, twirling prayer beads with his fingers.

Michael Kugelman, a South Asia programme associate at the Washington-based Woodrow Wilson International Center for Scholars, said there was no doubt that the five freed Taliban represented "the worst of the worst".

"They pose a clear and present threat," Kugelman told AFP.

Norullah Noori, another Taliban commander released along with Fazl, is accused of taking part in the 1998 massacre of thousands of Shiites when he was governor of the northern Afghan province of Balkh.

Although the released Taliban figures have expressed no desire for atonement or reconciliation, some of them have evinced a willingness to work for peace since being set free.

"(Noori) says he wants to join the Taliban again and bring changes (internally). He says Afghanistan needs peace now and he will work for peace with the Taliban," his cousin Abdullah told AFP.

But several residents in the Shomali plains scoff at the assertion that the release of the Taliban militants will help restart stalled peace talks.

The common refrain is that the Islamists are driven by a nihilistic blood thirst and no amount of negotiations will help expunge their violent ideology of jihad.

The released Taliban figures must be prevented from returning to the battlefield, said Omar Samad, senior Central Asia fellow at the New America Foundation.

"To not repeat some past errors in the case of other detainees who ended up on the battlefield again, the Qatari and US governments have an obligation to track these individuals, be aware of their activities and make sure they do not pose a threat to Afghans or others again," said Samad.

The Taliban militants were released in a deal brokered by Qatar, and are banned from travelling outside the Gulf state for at least one year.

But the threat of their return is real.

The Taliban will wait out the departure of virtually all US troops from Afghanistan at the end of 2016, said Syed Ahmed, a 40-year-old former Northern Alliance fighter who was blinded by shrapnel during the 1999 Shomali offensive.

President Barack Obama recently confirmed that the 32,000-strong US contingent in Afghanistan would be scaled back to about 9,800 troops by the start of next year.

Promoted
Listen to the latest songs, only on JioSaavn.com
The withdrawal plan has stoked anxiety about the future of Afghanistan, which some observers say is stuck in a hopeless quagmire after 13 years of war.

"The US invaded Afghanistan to rid the country of the Taliban," said Ahmed. "But the Taliban remain resilient after more than a decade of war. How can the withdrawal happen when the mission is still incomplete?"
Comments
AfghanistanUSwar