Ashraf Ghani arrived in Mazar as the Taliban captured Faizabad overnight, making it the ninth city to be overrun since Friday. 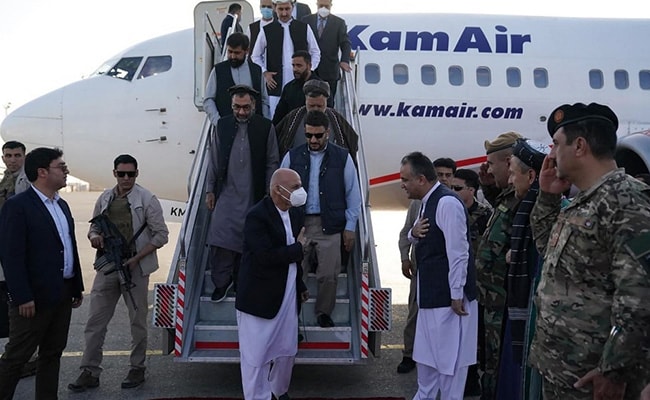 "The Taliban have captured the city now," said Zabihullah Attiq.

Afghan President Ashraf Ghani flew to the besieged northern city of Mazar-i-Sharif Wednesday to rally his beleaguered forces, with Taliban fighters having now taken more than a quarter of the country's provincial capitals in less than a week.

His visit was immediately overshadowed by the mass surrender of hundreds of Afghan soldiers in nearby Kunduz, along with the overnight capture of another provincial capital -- the ninth city to be overrun since Friday.

One army officer who asked not to be identified said they had endured withering mortar fire at Kunduz airport, and were left with no choice but to surrender.

"There was no way to fight back," he told AFP.

"My unit, with 20 soldiers, three humvees and four pick-up trucks just surrendered. We are now all waiting to get our pardon letter. There is a big queue."

In Mazar, Ghani held talks with long-time local strongman Atta Mohammad Noor and infamous warlord Abdul Rashid Dostum about the defence of the city, as Taliban fighters inched closer to its outskirts.

The loss of Mazar would be a catastrophic blow to the Kabul government and represent the complete collapse of its control over the north -- long a bastion of anti-Taliban militias.

Hours before Ghani arrived, pictures posted on official government social media accounts showed Dostum boarding a plane in Kabul en route to Mazar, along with a contingent of commandos.

After arriving in the city, Dostum issued a warning to the approaching Taliban.

"The Taliban never learn from the past," he told reporters, vowing to kill the jihadists.

"The Taliban have come to the north several times but they were always trapped. It is not easy for them to get out."

Dostum stands accused of massacring hundreds, if not thousands, of Taliban prisoners of war during the US-backed operations in 2001 that toppled the hardline Islamists' rule over the country.

Fighting in Afghanistan's long-running conflict has escalated dramatically since May, when the US-led military coalition began the final stage of a withdrawal set to be completed before the end of the month.

Further to the east of Mazar, in Badakhshan province's capital Faizabad, a local lawmaker told AFP that security forces had retreated after days of heavy clashes.

"The Taliban have captured the city now," said Zabihullah Attiq, confirming the latest city to fall.

Kunduz remains the Taliban's largest prize to date, with the mass surrender at the airport making a potential counterattack to retake the provincial capital highly unlikely for the time being.

An unknown number of government forces were still holding out at an army barracks outside the city.

The insurgents appeared to be consolidating their hold over captured cities in the north, with rifle-toting militants patrolling the streets of Kunduz on foot and in armoured humvees as smoke rose from smouldering shops destroyed during the fight for the city.

Government forces were also battling the hardline Islamists in Kandahar and Helmand, the southern Pashto-speaking provinces from where the Taliban draw their strength.

In Kandahar, fierce clashes erupted between Taliban insurgents and security forces, with heavy fighting reported near the city's prison, which the militants have been trying to reach for weeks.

The Taliban frequently target prisons to release incarcerated fighters and replenish their ranks.

But even as the Taliban routed government forces, US President Joe Biden gave no hint of delaying his deadline to withdraw all American troops by August 31, instead urging Afghan leaders to "fight for themselves" on Tuesday.

And as fighting raged, US diplomats were desperately trying to breathe life back into all-but-dead talks between the Afghan government and Taliban in Doha, where Washington's special envoy Zalmay Khalilzad was pushing the hardline Islamists to accept a ceasefire.

The Taliban have appeared largely indifferent to peace overtures, and seem intent on a military victory to crown a return to power after their ouster 20 years ago in the wake of the September 11 attacks.

After conquering most of the north, the Taliban have now set their sights on Mazar -- long a linchpin for the government's control of the area -- after capturing Sheberghan to its west, and Kunduz and Taloqan to its east.

Mazar saw some of the bloodiest fighting during the Taliban's scorched-earth rampage through the country in the 1990s, with rights groups accusing the jihadists of massacring up to 2,000 civilians -- mostly Shiite Hazaras -- after capturing the city in 1998.