A Spanish Matador Is Fatally Gored. Some Mourn; Others Say He Had It Coming. 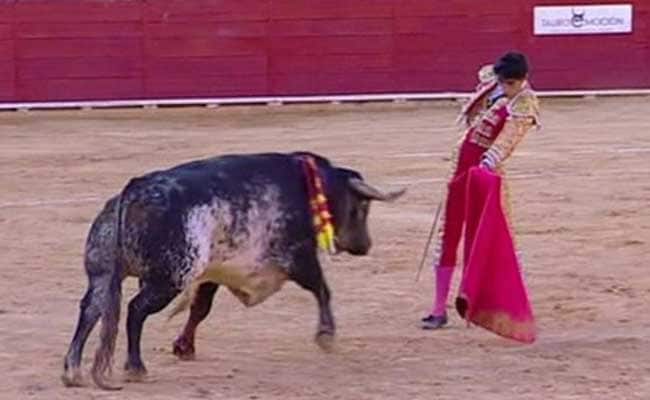 Victor Barrio is the first Spanish matador to die in the bullring since 1985. (Reuters photo)

Dressed in his tight-fitting red and golden bullfighting suit, with a red cape in his left hand and a sword in his right, Victor Barrio had a look of intense focus in his eyes. Before him was a bull, an immense beast of over 1,100 pounds.

Head tilted slightly downward, lips pursed, Barrio made small, subtle waves with his red cape as he worked to make a series of passes, attracting and maneuvering the bull so that, when the moment was right, he could make his final move: the thrusting of the sword and the killing of the bull.

As Barrio worked to attract the bull with his cape, the animal curved around the matador's body in a circular motion. Barrio made a fluid pivot on his left foot, then shuffled back to create more space to maneuver the bull.

Suddenly, the wind blew. The cape moved, and Barrio was caught off guard. The bull, named Lorenzo, gored Barrio's thigh and threw him off his feet. Barrio fell onto the sandy ground of the bullring, and the bull then gored him a second time with its horn, piercing through his chest and puncturing his lung.

Barrio lay face-down, motionless, on the ground. The eyes that were so full of intense concentration just moments before were now eerily cold. He was rushed, unconscious, to a field hospital, but was declared dead minutes later on Saturday. His funeral is scheduled for Monday.

He is the first Spanish matador to die in the bullring since 1985, when the 21-year-old bullfighter Jose Cubero "Yiyo" was fatally gored in Madrid. Barrio now joins a list of bullfighters who have met their unfortunate, untimely ends in the bullring. Barrio is the sixth matador to be killed in the last 50 years.

From childhood, Barrio had always been captivated by bullfighting, said a neighbor from Barrio's hometown of Grajera. For birthdays and The Day of the Three Kings, Barrio would receive presents like a cape, or a bullfighter's suit, the neighbor recalled.

On Sunday, over 3,000 people walked in a procession through the town of Sepulveda, about 80 miles north of Madrid. Barrio had been a resident of Sepulveda, and shouts of "Bullfighter! Bullfighter!" rang out as his coffin was carried on the shoulders of his cuadrilla, his entourage of assistants.

In this town of 250 inhabitants, calendars bearing Barrio's photo still hang on the walls of buildings -- a testament to the legacy he has left behind. Many children looked up to him with "admiration," and he is remembered by neighbors for being an "excellent person, marvelous, a sun, polite with everyone," reported the Spanish newspaper, ABC.

On Twitter, Barrio's widow, 32-year-old Raquel Sanz, wrote a message of heartbreak. She had watched her husband die right in front of her at the ring. She thanked everyone for their support, but tweeted, "My life has gone, I have no strength."

Others, however, were less sympathetic, pointing out that bullfighting is a cruel sport and that Barrio, as a matador, had it coming for him.

About 2,000 bullfights are still held every year in Spain, according to the BBC, and over 7,000 bulls die are killed each year as a result. The numbers have been declining however, with several Spanish regions and cities, including Catalonia, banning the practice outright. Many Spaniards consider bullfighting a tradition that reaches back through the centuries. Many others, however, call it barbarism best left to the Middle Ages.

(This story has not been edited by NDTV staff and is auto-generated from a syndicated feed.)
Comments
Spanish MatadorVictor BarrioBull fighting