The video has piqued the interest of social media users, who are all amazed at the man's good fortune. 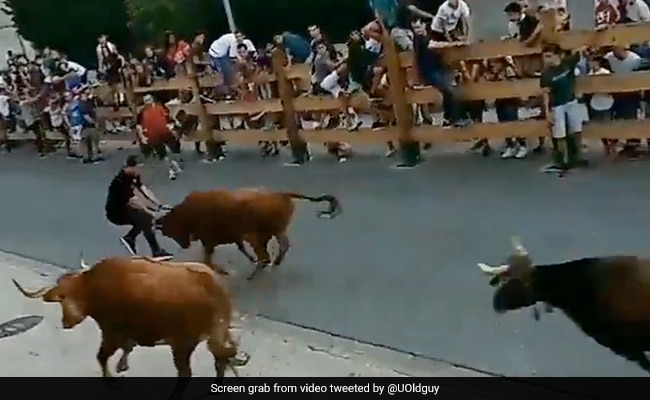 During such events, there is a chance of being trampled by a bull.

A terrifying video has been gaining traction on social media online that shows a man coming very close to being trampled during a bull run but surviving unharmed three times in the streets in front of onlookers.

In the video, a man dressed in black is seen running while competing in a bull run. Several massive bulls with long horns are seen running after him. The first bull approaches the closely, almost hitting him in the back, but he manages to avoid the blow, and the bull crashes into the wall in front of him.

The man then runs towards the road, but another bull charges at him, which he narrowly avoids with a small push from the animal. By this time, the first bull got ready to hit him again, and the man had nowhere to go because he was surrounded by running bulls. Another bull charged at him from behind, and the man was unable to see the animal coming from behind. He jumps to move in a different direction, and the two bulls collide and collapse for a brief moment. After this fortunate moment, the man leaps over the fence and blends into the crowd.

The video has piqued the interest of social media users, who are all amazed at the man's good fortune. The video was tweeted by @uoldguy with the caption, "Someone's lucky day."

Since being shared, the video has garnered thousands of views and several likes and comments.

There were also comments critical of those who took part in these dangerous events.

The location where the incident took place is not known.