A US Man Was Shot And Killed By Police. A Jury Gave His Family $4

Police said Gregory Hill Jr pointed a gun at the deputies and ignored commands to drop it, forcing one of them to open fire 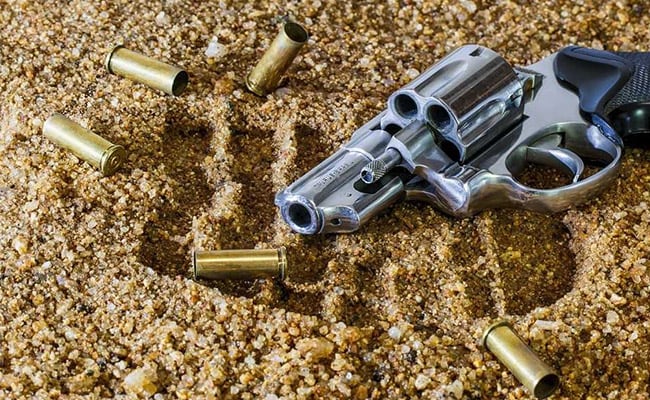 Only three people know exactly what happened in the last seconds of Gregory Hill Jr.'s life: Hill and the two Florida sheriff's deputies who went to his home that day in 2014, one of whom killed him.

Police said Hill pointed a gun at the deputies and ignored commands to drop it, forcing one of them to open fire. The gun would've fallen out of Hill's hands, his family's attorney said. But the unloaded weapon was found in the back pocket of the jean shorts Hill was wearing.

Hill's mother sued St. Lucie County Sheriff Ken Mascara and Christopher Newman, the deputy who killed her son, for wrongful death. After nearly two weeks of trial and 10 hours of deliberation last month, a jury sided with police and found that Newman did nothing wrong. The eight jurors decided that Mascara was 1 percent at fault, while Hill was largely to blame for his death - at 99 percent - because he was drunk during the confrontation.

In a move that the family's attorney said was doubly surprising, the jury gave money to the losing party: $4 - a dollar for funeral costs, which ran about $11,000, and another for each of Hill's three young children, ages 13, 10 and 7.

Adjusting for the blame the jury placed on Mascara, the family would receive only 1 percent of the $4, or 4 cents, said John Phillips, who represents Hill's mother, Viola Bryant.

"I've never seen anything like it. If you lose a case, give zero dollars. If you win a case, give fair value," Phillips said. "That's where we're just kind of confused. Were they trying to say that we should be punished for basically bringing the suit and thus the dollar? Or were they saying that the true value of these children's pain was a dollar?"

Phillips likened the scenario to giving tips to restaurant servers for terrible service.

Without a tip, "they may wonder if I forgot to tip, or if I was just cheap. If I leave a dollar, they're going to know I intended to tip and this is an insult."

In a statement after the May 24 verdict, Mascara said:

"We are pleased to see this difficult and tragic incident come to a conclusion. Deputy Newman was placed in a very difficult situation, and like so many fellow law enforcement officers must do every day, he made the best decision he could for the safety of his partner, himself, and the public given the circumstances he faced. We appreciate the jury's time and understanding and wish everyone involved in this case the best as they move forward."

Hill was killed on the afternoon of Jan. 14, 2014. The 30-year-old was drunk after spending most of his day off from his job at Coca-Cola, listening to music in the "man cave" he had built in the garage of his Fort Pierce, Florida, home when the two sheriff's deputies showed up.

Parents picking their children up at the elementary school across the street from Hill's home had called in a noise complaint, concerned that their kids were overhearing the expletive-laden music he had been playing, The Washington Post's Wesley Lowery reported. Newman and another deputy, Edward Lopez, first knocked on the front door before knocking on the garage door. According to Hill's family's lawyers, he began to open the garage door, saw the police, and began to close it again when Newman opened fire.

Police said Hill was holding a gun in his right hand when he opened the door. They said Hill was ordered to drop the weapon, but instead raised it toward Lopez's direction as he was closing the door.

"Deputy Newman, perceiving that his life and the life of his fellow officer was in imminent danger, fired four shots at Hill," according to a court document filed by Newman's attorney. "As the garage door was in the process of being closed during this time, the bullets traveled through the garage door, striking and killing Hill."

Witnesses told investigators that the entire confrontation was over in seconds. Hill was found lying face down in a pool of blood. He had been shot in the head, abdomen and groin. The tip of a dark-colored Kel-Tec 9mm was sticking out the top of Hill's right back pocket.

Phillips said Hill's then-9-year-old daughter was at the elementary school across the street and saw her father get killed. The girl, now 13, testified that her father had no gun in his hand, Phillips said.

If Hill was holding the gun in his hand, he would have dropped it on the floor after he was shot in the head, Phillips said. It would have had some tissue and blood spatter, or sweat, but DNA tests showed that none of these were found on the weapon.

"We thought we tried a winning case. . . . If the gun was in Hill's pocket the entire time, then this would've been a violation of civil rights," he said.

After the verdict was read on May 24, Hill's fiancee at that time, Monique Davis, walked out of the courtroom, Phillips said.

"My heart just dropped," Davis told NBC News. "It was like, are y'all serious?"

Phillips said he will file a motion for a retrial. Because the case is a federal litigation involving use of force, he said there's a chance he'll appeal to the Supreme Court.

Promoted
Listen to the latest songs, only on JioSaavn.com
A GoFundMe created on behalf of Hill's family had so far raised more than $45,000 as of Saturday afternoon.