It's unclear how much finches are worth in other countries, but the small birds range in price from $18 to $25 on Petsmart.com. 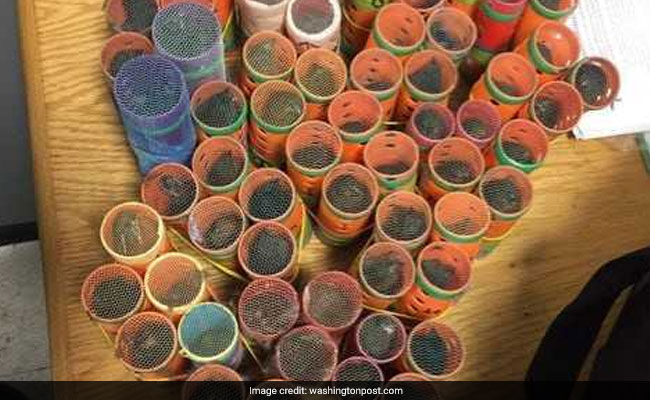 Dozens of finches hidden in hair rollers inside a bag at John F Kennedy International Airport.

US Customs and Border Protection said agents stopped a passenger traveling from Guyana to New York on Saturday, carrying 70 finches hidden inside small, plastic rollers. The agency said in a statement that the birds have been "detained under quarantine."

The passenger was barred from entering the United States but was able to withdraw his application for entry so that he may reapply to visit in the future, authorities said. Although there are penalties, including fines, for smuggling birds into the country, authorities said there were no further penalties in this case.

Anthony Bucci, a spokesman for the agency in New York, told The Washington Post that over the past 12 to 18 months, agents in New York have seized nearly 200 finches.

In most instances, he said, the birds are sedated and hidden inside hair rollers or, sometimes, toilet paper tubes, to attempt to sneak them past agents.

Troy Miller, director of the US Customs and Border Protection's New York Field Office, said in the statement that the agency's agriculture specialists "are the first line of defense to prevent the introduction of animal diseases that have the potential to cause significant damage to the Nation's agricultural economy."

Bucci said finches are used primarily for gambling purposes - people may bet on which bird will chirp the loudest or how many times it will chirp in a minute. It's unclear how much finches are worth in other countries, but the small birds range in price from $18 to $25 on Petsmart.com.

The birds collected at JFK have been turned over to the US Department of Agriculture's Veterinary Services office, which could not immediately be reached for comment about the incident.

In the United States, it is legal to travel with pet birds as long as passengers adhere to proper protocol. It is also legal to import birds for commercial use, but the importer must have a permit, and the birds must be quarantined at a USDA Animal Import Center, according to information from the USDA's Animal and Plant Health Inspection Service.