Palestinian President Mahmoud Abbas ordered the suspension of all official contact with Israel until it removed the metal detectors. 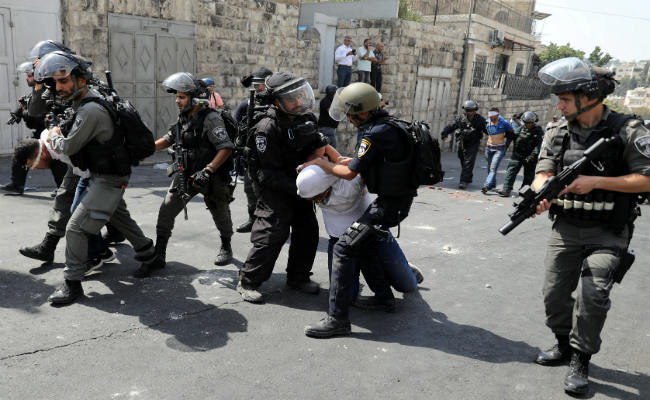 JERUSALEM: Six people were killed on Friday in the bloodiest spate of Israeli-Palestinian violence for years, prompted by new security Israeli measures at Jerusalem's holiest site.

Three Israelis were stabbed to death in a Jewish settlement in the Israeli-occupied West Bank, hours after three Palestinians were killed in violence prompted by Israel's installation of metal detectors at entry points to the Noble Sanctuary-Temple Mount compound in Jerusalem's walled Old City.

Palestinian President Mahmoud Abbas ordered the suspension of all official contact with Israel until it removed the metal detectors. He gave no details, but current contacts are largely limited to security cooperation.

"I declare the suspension of all contacts with the Israeli side on all levels until it cancels its measures at al Aqsa mosque and preserves the status quo," Abbas said in a brief televised speech.

The three Israelis stabbed to death and a fourth who was wounded were from the fenced-in West Bank settlement of Neve Tsuf. Israeli media said the three dead were all members of the same family, two men aged 60 and 40 and a woman of 40.

The wounded woman, 68, was hospitalised with stab wounds to her back, Israeli media said.

A still photo carried by Israeli television showed a kitchen floor completely red with blood. The family had sat down to a traditional Friday evening meal when the attack occurred, according to Israel Radio.

The Israeli army and media said the assailant slipped into the settlement under cover of darkness to carry out his attack.

Israel Radio identified him as a 19-year-old Palestinian from the West Bank village of Khobar near Ramallah. It said he was shot, but his condition was not initially known.

Earlier, Palestinian worshippers clashed with Israeli security forces. Tensions had mounted for days as Palestinians hurled rocks and Israeli police used stun grenades after the detectors were placed outside the sacred venue, known to Muslims as the Noble Sanctuary and to Jews as Temple Mount.

It was not immediately clear who fired the shots, with unconfirmed media reports that an Israeli settler was responsible in Sharaf's death.

Israel decided to install the metal detectors at the entry point to the shrine in Jerusalem's walled Old City on Sunday, after the killing of two Israeli policemen on July 14.

The shrine includes the al Aqsa Mosque, the third-holiest site in Islam, and the golden Dome of the Rock. It was also the site of an ancient Jewish temple, the holiest place in Judaism.

Despite international pressure to remove the metal detectors, Prime Minister Benjamin Netanyahu's security cabinet decided in Friday's early hours to keep them in place, saying they were needed to prevent arms being smuggled into the shrine.

In protest, thousands of worshippers gathered for Friday prayers at various entrances to the sacred compound, which sits on a marble and stone plateau in the Old City. They refused to enter, preferring to pray outside, in some cases filling the narrow alleyways of the Old City's Muslim quarter.

Muslim leaders and Palestinian political factions had urged the faithful to gather for a "day of rage" on Friday against the new security policies, which they see as changing delicate agreements that have governed the holy site for decades.

Israeli police mobilised extra units and erected barriers to carry out checks at entrances to the Old City. Access to the shrine for Muslims was limited to men over 50 but open to women of all ages. Roadblocks were in place on approach roads to Jerusalem to stop buses carrying Muslims to the site.

At one location near the Old City, stone throwers did try to break through a police line, and police used stun grenades to drive them back.

The hilltop compound has long been a source of religious friction. Since Israel captured and annexed the Old City, including the compound, in the 1967 Middle East war, it has also become a symbol of Palestinian nationalism. "This is our place of prayer, we have sovereignty here," Salaam said.

On Thursday, Turkish President Tayyip Erdogan called Israeli President Reuven Rivlin to press for the removal of the metal detectors. Nickolay Mladenov, the U.N. special coordinator for the Middle East, appealed for calm and the White House called for a resolution. Jordan, the custodian of the holy site, has also been involved in mediation efforts.

Promoted
Listen to the latest songs, only on JioSaavn.com
But Netanyahu's 11-member security cabinet opted in a late-night meeting to retain the metal detectors to ensure no weapons were smuggled in, a week after three Arab-Israeli gunmen shot dead two Israeli policemen in the vicinity of the complex.
© Thomson Reuters 2017