Bryan Knight, the son who watched his dad leave to fight in the Vietnam War, was also the man who flew him home, the pilot of that flight from California to Texas that landed at Love Field, the last place the two saw each other. 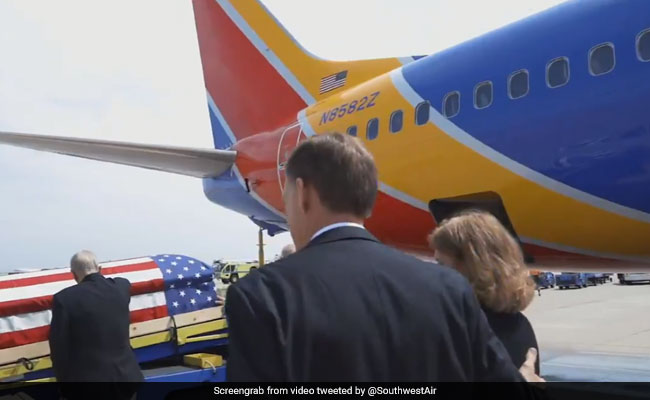 Knight's remains, in a casket draped with an American flag, were received with full military honors

Bryan Knight was 5 years old when he waved goodbye to his father from Dallas Love Field airport. He never saw him again.

The year was 1967 and Roy Knight Jr. was heading to war. The pilot reported to Udorn Royal Thai Air Force Base in January. By May - after flying near daily combat missions - Knight was missing, his plane shot down over enemy territory in Laos. It was another seven years before his family found out he'd been killed. And on Thursday, 45 years after that, they finally received closure.

Knight's remains, recovered near his plane's crash site more than five decades after it went down, were flown from Honolulu to Oakland, California, and from Oakland back to Dallas, where his family greeted the Southwest flight as it arrived.

Bryan Knight, the son who watched his dad leave to fight in the Vietnam War, was also the man who flew him home, the pilot of that flight from California to Texas that landed at Love Field, the last place the two saw each other.

"When I first got the call, it was almost surreal," Bryan Knight said in an interview with Southwest Airlines. "I really didn't think it would ever happen. Wow, you know, he's really coming home. We're going to be able to bring him back, and we're going to have a place where we can honor him."

His older brother, Roy Knight III told the local Weatherford Democrat newspaper that the end of the half century journey was hard to fathom.

Captain Knight last saw his father at Dallas Love Field Airport when he was deployed to serve in the Vietnam War. Today, more than 50 years after he went missing in action, Captain Knight flew his father home for the final time.lin pic.twitter.com/RUg0K1c2jN

"You have these competing emotions - you're happy this is resolved," he said. "But there's that uncomfortable feeling of change and coming to grips with reality, then there's also immense, intense sadness that comes whenever you contemplate the loss of someone that's important to you."

When the plane landed in Dallas, the airport's fire trucks greeted it with a water salute. Knight's remains, in a casket draped with an American flag, were received with full military honors. Inside the terminal, hundreds looked on, their faces pressed against the window, listening as a gate agent tearfully recounted the Knight family's story over the intercom.

It was the hero's homecoming never afforded to many Vietnam veterans, who today number fewer than 850,000, according to the Disabled American Veterans. Some of those men and women are still suffering the long lingering effects of their time at war - including health issues related to Agent Orange exposure and post traumatic stress disorder. The National Coalition for Homeless Veterans estimates that nearly half of all homeless veterans served during Vietnam.

But at the end of a week dominated by macabre news, Knight's return was the rare bright spot. Jackson Proskow, the Washington bureau chief for Canada's Global News, was among the crowd. He started tweeting.

"I'm at the airport in Dallas, waiting for my flight home to DC from El Paso, and something incredible is happening," he wrote.

As the stirring scene unfolded, travelers, who had left their seats in waiting areas and paused their walks through the terminal, got quiet. The bustling airport was, for a moment, still. Proskow saw people wiping away tears as the casket was unloaded.

"It's incredible that everyone got to share in that," Proskow told The Washington Post. "I don't know if that was the family's intent or not, but they should be commended for allowing it because it was so powerful for everyone there."

Proskow had a layover in Dallas on his way home from El Paso, Texas, where he was covering the mass shooting that left 22 dead. He was just beginning to process what he'd seen on that grim reporting trip when he heard Knight's story. It was a flash of hope after a few dark days.

"It's already emotional," he said. "And then to hear it's his son doing that, how could you not react? It's unbelievable. It was incredibly moving."

Knight is now one of more than 1,000 Americans killed in the Vietnam War whose remains the Department of Defense has identified and returned to families for burial, the agency estimates. There are still more than 1,500 who remain unaccounted for.

The pilot, who left for war as a major and was promoted to colonel while he was missing in action, enlisted in the Air Force just a few days after his 17th birthday. He served as a fighter pilot in Germany and France in the late 1950s and early '60s before moving back to Texas with his young family. He had just finished his bachelor's degree when he was ordered to report to a base in Thailand.

Knight's plane was shot down while he was attacking a military target on the Ho Chi Minh Trail in Laos, which borders Vietnam to the west. At first, he was listed as missing but was declared killed in action in 1974. He was posthumously awarded the Air Force Cross, Silver Star, Distinguished Flying Cross, Purple Heart and six Air Medals for his service, his obituary says.

On Facebook, Roy Knight III tracked his father's progress: across the Pacific Ocean on Wednesday, then across the country on Thursday. On Saturday, he'll be taken to Holder's Chapel in Cool, Texas, a few miles west of Weatherford. He'll be buried with family members. And, at long last, he'll be home.