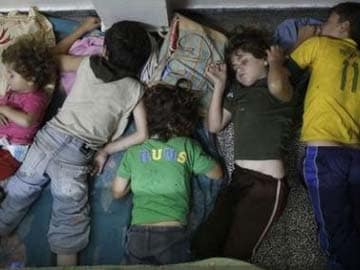 Palestinian children taking refuge from an Israeli ground invasion and air strikes sleep at a United Nations school in Jabaliya in the northern Gaza Strip, July 25, 2014.

Gaza: Around 400,000 children in the Gaza Strip are showing symptoms of distress, including bed wetting, clinging to parents and nightmares, and need psychosocial support, the United Nations Children's Fund (Unicef) has said.

At least 429 children were killed in the last one month as a result of Israel's air strikes and shelling on Gaza where half of the population of 1.8 million people are under the age of 18, it stated.

"Of the last three conflicts in Gaza, this has been the longest, deadliest and most destructive," said June Kunugi, UNICEF representative in Palestine, in a statement posted on the organisation's website. "Its human and material toll is beyond words."

At least 2,744 children have also been reported injured, according to Unicef. Some of the young victims, who suffered debilitating injuries for which no treatment is available in Gaza, need to be referred for treatment outside the coastal enclave.

The UN body says that as the three-day ceasefire in Gaza draws to a close families are struggling to cope with the aftermath of 28 days of violence and destruction that has left an estimated 65,000 people homeless.

Promoted
Listen to the latest songs, only on JioSaavn.com
The New York-based UN agency warned that overcrowding at UN-run shelters, many of which are schools, is making it difficult to provide these families with basic needs and clean conditions to prevent the spread of diseases. Diarrhoea and skin diseases among children are on the rise.

With basic services severely disrupted in the Gaza Strip, access to water is constrained for 1.5 million people and the lack of electricity is affecting water distribution, sanitation and health services, Unicef added.