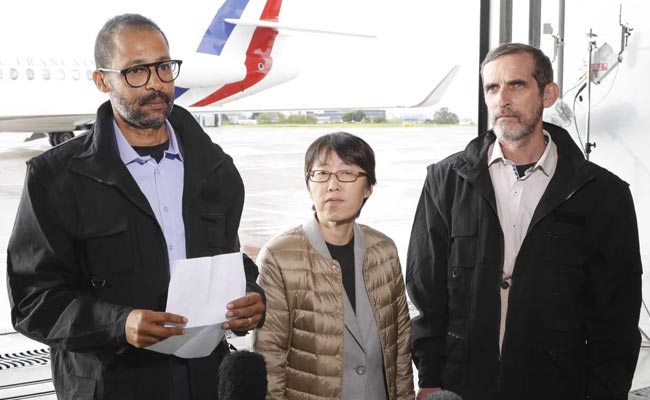 Three hostages freed by French commandos from terrorists in Burkina Faso arrived in Paris on Saturday.

Three hostages freed by French commandos from terrorists in Burkina Faso arrived in Paris on Saturday, expressing sorrow at the death of two French soldiers in the rescue operation.

President Emmanuel Macron welcomed the hostages as they stepped off the French government jet less than 48 hours after French special forces stormed their captors' hideout in a daring night-time raid.

Two Frenchmen kidnapped while on safari in Benin more than a week earlier, as well as an American woman and a South Korean woman who were being held with them, were liberated in the high-risk mission authorised by Macron. The American, who has not been identified, was being repatriated separately.

"All our thoughts go to the families of the soldiers and to the soldiers who lost their lives to free us from this hell," Laurent Lassimouillas earlier told reporters as he met Burkinabe President Roch Kabore in Ouagadougou.

Macron will lead a national tribute to the men, both officers in the naval special forces, at the Les Invalides military hospital and mausoleum in Paris on Tuesday.

Lassimouillas also expressed regret over the death of the Beninese park guide, who was shot dead when the two tourists were kidnapped.

French officials said on Friday it was not yet clear who had kidnapped them in Benin but that their captors planned to hand them over to an al Qaeda affiliate in neighbouring Mali.

Jihadist groups with links to al Qaeda and Islamic State have expanded their presence across West Africa's Sahel region, a strip of scrubland beneath the Sahara desert, in recent years and taken a number of Western hostages.

France, the former colonial power in the region, intervened in Mali in 2013 to halt an advance by Islamist terrorists and has kept about 4,500 troops in the Sahel since then.

"France's message to terrorists is clear: those who want to attack France, the French, should know that we will hunt them, we will find them, and we will kill them," Defence Minister Florence Parly said after joining Macron at the Villacoublay military airport outside Paris.

France was doing all it could to secure the release of another French hostage, Sophie Petronin, Foreign Minister Jean-Yves Le Drian said. Gunmen kidnapped Petronin in December 2016 in the northern Malian city of Gao.