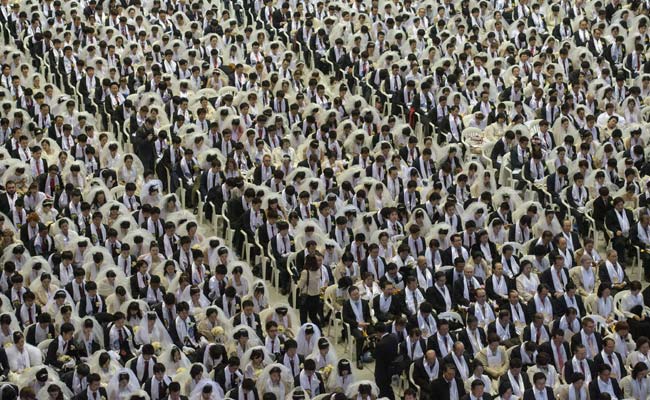 Couples attend a mass wedding held by the Unification Church in Gapyeong on March 3, 2015. (AFP photo)

Thousands of couples took part in a mass wedding on Tuesday at the South Korean headquarters of the Unification Church -- the third such event since the death of their "messiah" and church founder Sun Myung Moon.

Around 3,800 identically-dressed couples -- mostly young and some who had met just days before -- participated in the ceremony in Gapyeong, east of the capital Seoul.

Mass weddings, often held in giant sports stadiums with tens of thousands of couples, have long been a signature feature of the church founded by Moon in 1954.

Moon died in September 2012, aged 92, of complications from pneumonia, and his 72-year-old widow Hak Ja Han presided over Tuesday's ceremony.

The church's mass weddings began in the early 1960s. At first, they involved just a few dozen couples but the numbers mushroomed over the years.

Many were personally matched by Moon, who taught that romantic love led to sexual promiscuity, mismatched couples and dysfunctional societies.

The majority of couples participating on Tuesday were already married, but had done so before joining the Church and chose to renew their vows as full members.

Around 800 new couples married on Tuesday had chosen to be "matched" just four days before at an "engagement ceremony" presided over by Moon's widow, though in recent years matchmaking responsibilities have largely shifted towards parents.

Michael Schroder, a 20-year-old from London, said he had been "extremely nervous" before being paired off with his new Japanese wife, Atsumi Sato, 21.

Sato said she had been unable to sleep all night, "so I'm really tired, but happy as well."

Those who choose to be matched by the church must confirm under oath that they are virgins, and after their wedding the couple must refrain from sexual relations for a minimum of 40 days.

Revered by his followers but denounced by critics as a charlatan, Moon was a deeply divisive figure who was once jailed in the United States for tax evasion.

Promoted
Listen to the latest songs, only on JioSaavn.com
The teachings of the Unification Church are based on the Bible but with new interpretations, and Moon saw his role as completing the unfulfilled mission of Jesus to restore humanity to a state of "sinless" purity.

While it claims a worldwide following of three million, experts suggest the core membership is far smaller.