2 US Sisters Got Lost In Woods. Wilderness Training Helped Them Survive

Leia (8) and Caroline (5) stayed together, huddling for warmth beneath a bush in the forest for about two days. 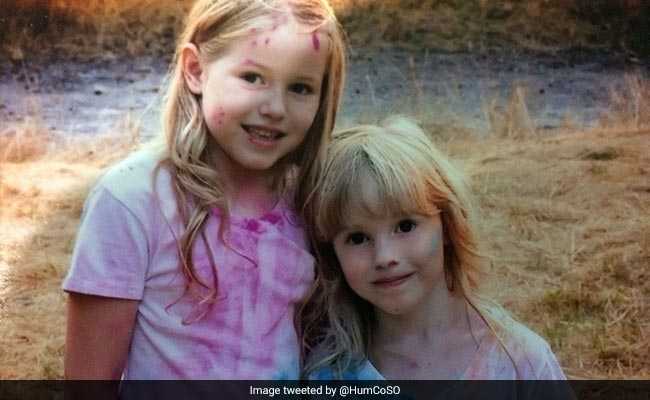 Leia and Caroline Carico lost their way in a heavily-wooded area with a steep terrain.

The Carrico sisters were getting impatient.

After days of heavy rain in Humboldt County, California, the sky was finally clear Friday afternoon. Leia, 8, and Caroline, 5, were eager to play outside and hike through the woods that border Richardson Grove State Park by their northern California home.

But their mom, Misty Carrico, wasn't quite ready, so she asked them to wait as she finished up chores, she later told authorities.

The sisters wandered into the forest, a heavily-wooded area with a steep terrain. Leia wore a hooded, long sleeve shirt and purple rain boots. Caroline had pulled on a maroon rain jacket with a white horses print. Her boots were hot pink.

In the woods, they followed a trail they knew well, which branched to one they didn't, authorities said. From there, they followed a path made by animals - until they realized nothing looked familiar anymore. 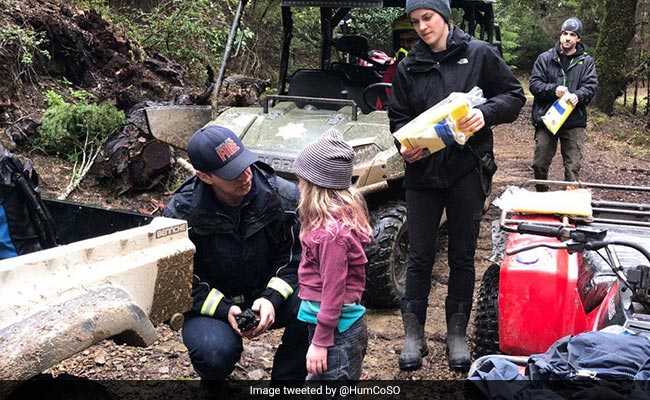 For 44 hours, through two cold, wet nights hundreds of people searched for the two sisters.

This, the sisters later told authorities, is when their survival training kicked in.

For 44 hours, through two cold, wet nights as hundreds of people searched for them in the steep and tree-dense forest, the sisters stayed together, huddling for warmth beneath a bush they called their "huckleberry home" and drinking fresh water droplets from the leaves. In their first interview since their harrowing time, Caroline and Leia told ABC News Monday that they used the younger sister's rain jacket to stay dry.

Most importantly, the girls applied this most vital survival tip - when they realized they were lost, Caroline and Leia stopped walking and waited for help.

That decision, informed by their local 4-H club's wilderness education class, on family camping trips and in movies about lost people, is what eventually helped rescuers find the sisters Sunday morning.

"They reacted right to what they were supposed to do," Humboldt County Sheriff William Honsal told The Post Monday. "That's the biggest story of all, having parents talk to their kids."

Wilderness classes teach simple but critical tips for surviving outside: If you get lost, stop and wait. Find dry ground at the base of a tree or bush. Crawl underneath and make yourself as small as possible.

"That's exactly what they did," Honsal said, of Caroline and Leia.

As they applied their wilderness skills, a frantic rescue mission was already underway. 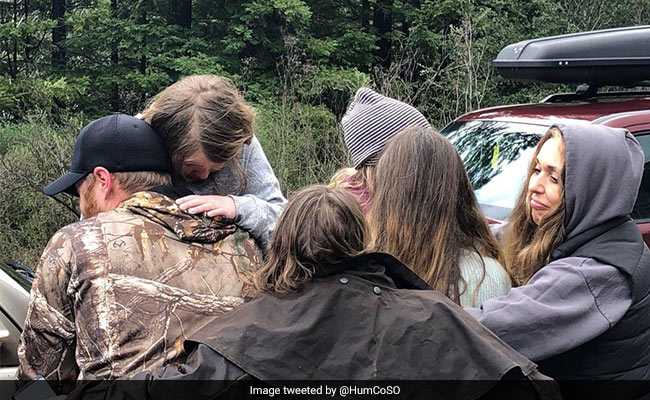 The two girls said they thought of happy times while they were alone and afraid in the forest.

About 30 minutes after their hike conversation, Caroline and Leia's mother realized they weren't playing in the yard. Over the next couple hours, their parents formed their own search party, authorities said, calling neighbors and scouring the area around their house for clues.

At about 6 p.m. Friday, the Humboldt County Sheriff's Department was notified that the girls were missing. A search party was dispatched with people from at least 10 agencies, including nearby sheriff's departments, volunteer fire departments, the National Guard and the U.S. Coast Guard.

The first night, as many as 20 people searched the woods until 2:30 a.m., when authorities decided to pause the mission until daylight could provide a more clear path, Honsal said.

They knew what the girls faced: cold, damp conditions and predatory animals. "There was a lot of desperation at that point," Honsal said.

It had been raining off and on, thick fog lingered in the trees, and the temperatures had fallen overnight to the mid-40s, authorities said. If the girls had gotten wet, they were at risk for hypothermia. Mountains lions, black bears and bobcats all live in the woods.

"I wasn't hopeful after the first night," Carrico told ABC News. "I constantly heard my kids screaming for help in my head."

By Saturday morning, the search party had grown to 60 people and six dog teams. They looked by land and air, authorities said, using ATVs and moving in a strategic, circular pattern.

As the sun set for a second night, they still hadn't found the girls. All but a dozen people were pulled off the mountain, Honsal said. In the dark, those who remained drove along dirt roads and ATV trails, screaming for Caroline and Leia and hoping for feedback that did not come.

In the woods, the sisters were screaming, too - but nobody was answering. Still beneath their "huckleberry home," the bush and brambles had kept them dry from the rain and hidden from predators, but it couldn't keep out the fear.

In the darkness Friday, Leia told ABC News that her little sister "cried the whole night." She encouraged Caroline to think "happy thoughts" about their family.

Caroline slept some, Leia said, but as the big sister, it was her to job to keep watch.

Leia collected brush to make a fire - another skill she learned during wilderness training, family camping trips and movies about lost people, she told ABC News. She abandoned her mission when the warm sun came out.

As the sun rose Sunday morning, the search party had more than quadrupled in size. There were two helicopters, a small plane, a heat-sensing drone, a dozen dog teams and 270 people. They had 12 hours before the temperature was predicted to plummet to the mid 30s, and the girls would be exposed to dangerous cold.

"This was our day," Honsal said. "Sunday had to be the day."

As volunteers fanned out across the mountain, two firefighters from Piercy, California, headed to the southern perimeter where there had been reports of footprints.

Fire Chief Delbert Crumley and firefighter Abram Hill drove to the area and found a trail with shoe tracks that appeared fresh, authorities said. The men began tracking them through the thick forest. They called out for the girls.

"We heard crackling, and we thought we heard somebody say, 'Dad,' " Crumley told ABC News. "And we called their names again, and they said, 'We're right here.' "

The men had to cut through brambles to reach the girls who were cold, tired and dehydrated - but not wet.

Authorities drove them down the hill for an emotional reunion with their parents. During their 44 hours in the wild, Caroline and Leia yelled so much they lost their voices for a while.

"They saved each other," Carrico told ABC News. "I'm the proud mom. I raised super heroes."

The sisters were given warm blankets and admitted to a hospital for a full evaluation.

There, they shared a bed - and a pizza.