Iran train accident: The train travelling to the city of Yazd collided with an excavator before going off the rails 50 km (30 miles) from the city of Tabas. 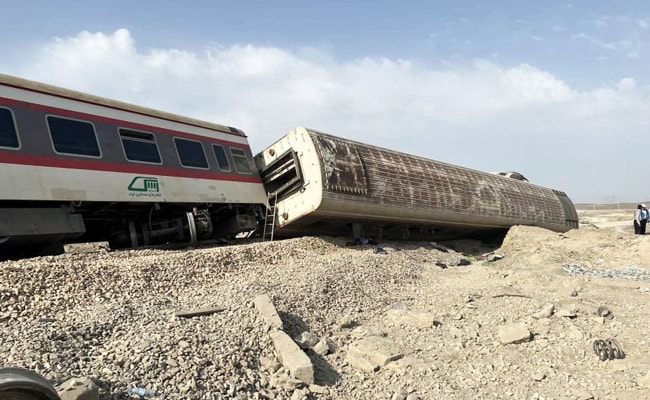 At least 17 people were killed and dozens injured Wednesday when a train derailed near the central Iranian city of Tabas after hitting an excavator beside the track, state media reported.

The train was on its way from the northeastern city of Mashhad to the central city of Yazd with 388 passengers on board went it careered off the track in the desert at 5:30 am (0100 GMT).

"Seventeen people are dead and 37 of the 86 injured people have been transferred to hospital," emergency services spokesman Mojtaba Khaledi told state television.

"The number of the dead may rise as some of the injured are in critical condition," he said, adding that "24 ambulances and three helicopters had been dispatched to the scene."

The deputy head of Iran's state-owned railways, Mir Hassan Moussavi, told the state broadcaster that the train was carrying 348 passengers.

It "derailed after hitting an excavator" that was near the track, he said.

Some of the injured were airlifted to hospital by helicopter, state television footage showed.

One of the pictures showed a yellow excavator on its side by the track.

President Ebrahim Raisi expressed his grief over the derailment and offered his condolences to the families of the dead.

He also issued orders to expedite the investigation into the causes of the crash, his office said.

Roads and Urban Development Minister Rostam Ghassemi apologised to Iranians on Twitter and said the ministry was responsible for the incident.

The Tabas prosecutor visited the scene as a judicial investigation was launched, Iranian media reported.

The collapse of the 10-storey Metropol building, which was under construction in Abadan, sparked angry protests in solidarity with the families of the dead.

The provincial judiciary said it had arrested 13 people, including Abadan's mayor and two former mayors, suspected of being "responsible" for the tragedy.

The disaster was one of Iran's deadliest in years and sparked a demonstrations across the country against authorities accused of corruption and incompetence.

The then head of Iranian railways resigned after four of his employees were arrested following the collision on the main line between Tehran and second city Mashhad.