Law enforcement officials identified the alleged shooter as Robert Bowers, 46, a Pittsburgh resident who the FBI said was not previously known to law enforcement. 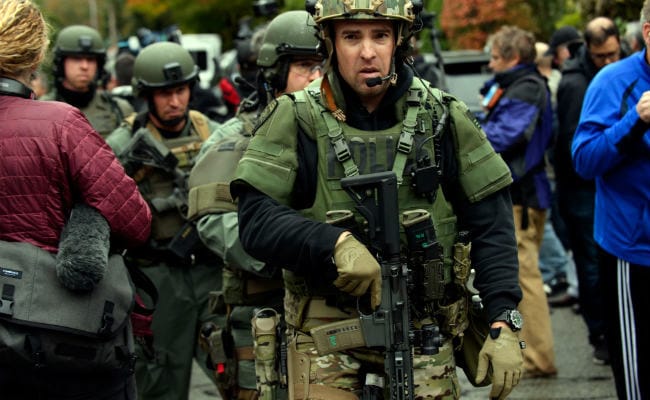 A man armed with a semiautomatic assault-style rifle stormed the Tree of Life synagogue here Saturday and shot worshipers during Shabbat services, killing 11 and wounding six in the deadliest attack on Jews in the history of the United States.

The mass shooting targeted members of a synagogue that is an anchor of Pittsburgh's large and close-knit Jewish community, a massacre that authorities immediately labeled a hate crime as they investigated the suspect's history of anti-Semitic online screeds.

Law enforcement officials identified the alleged shooter as Robert Bowers, 46, a Pittsburgh resident who the FBI said was not previously known to law enforcement.

A man with that name had posted anti-Semitic slurs on social media before the shooting, expressing anger that a nonprofit Jewish organization in the neighborhood has helped refugees settle in the United States. In what appeared to be his final social media post hours before the attack, the man wrote: "I can't sit by and watch my people get slaughtered. Screw your optics, I'm going in."

Bowers allegedly burst into the synagogue's regular Saturday 9:45 a.m. service with an AR-15-style assault rifle and three handguns, authorities said. Witnesses told police he shouted anti-Semitic slurs and began firing. The synagogue, in the Squirrel Hill neighborhood, did not have armed security guards.

Police received calls about an active shooter at 9:54 a.m. and dispatched officers a minute later. Police said Bowers left the building and encountered the responding officers, shooting one before retreating into the synagogue to hide. More officers responded and, after an exchange of gunfire, Bowers was struck with multiple gunshot wounds, was arrested and was taken to a hospital, authorities said.

Four police officers were shot during the response and were in stable condition late Saturday. It was unclear late Saturday whether Bowers was speaking with authorities or had an attorney.

The Pittsburgh massacre is yet another example of the homicidal fury and bigotry on the fringes of American society. It weaves together elements of many other active-shooter incidents that have horrified Americans in recent years, and highlighted the unusual frequency of mass casualty events in this country in comparison with almost every other nation in the world.

Once again the suspect was a man armed with a semiautomatic assault-style weapon - as was, for example, the gunman who killed 49 people in the Orlando, Florida, Pulse nightclub in 2016. Once again the crime scene was a house of worship, a classic "soft target," as was the First Baptist Church in Sutherland Springs, Texas, where a disturbed gunman hoping to kill his mother-in-law slaughtered 26 people during a Sunday service last November.

And once again the victims were members of an ethnic or religious minority with a long history of persecution - as were the nine African-American worshipers killed three years ago when a white supremacist invaded a Bible study session at the Emanuel African Methodist Episcopal Church in Charleston, South Carolina.

"This was the single most lethal and violent attack on the Jewish community in the history of the country," said Jonathan Greenblatt, CEO and national director of the Anti-Defamation League. "We've never had an attack of such depravity where so many people were killed. . . . When you go into a synagogue, saying 'I want to kill all the Jews,' that's a hate crime."

President Donald Trump denounced the massacre and said something needs to be done about such crimes, suggesting a more frequent and speedier use of the death penalty, saying it should be "brought into vogue."

"It's a terrible, terrible thing, what's going on with hate in our country and frankly all over the world," Trump said before boarding Air Force One on Saturday afternoon for a flight to Indianapolis. The president made a full-throated denunciation of anti-Semitism at a rally in Murphysboro, Illinois, later in the day: "This evil anti-Semitic attack is an assault on all of us. It's an assault on humanity. It will require all of us working together to extract the hateful poison of anti-Semitism from our world."

He said the massacre could have been prevented if the synagogue had armed security guards. Trump has frequently suggested that more armed people could deter mass shootings, making such comments after shooting rampages in Parkland, Florida, and Orlando in recent years. Armed law enforcement officers were, in fact, present at both of those mass shootings.

The Anti-Defamation League, founded more than a century ago, has documented numerous murderous attacks on Jews in the United States, such as the assault by a white supremacist on the U.S. Holocaust Museum in 2009 that killed a security guard. The previous deadliest anti-Semitic attack, the ADL said, was actually a case of mistaken religious identity that claimed four lives. It happened in 1985, when a racist attacked Charles Goldmark and his family in Seattle, thinking they were Jewish.

The ADL said Saturday that anti-Semitic incidents rose 57 percent in 2017, with 1,986 documented events, a spike the league attributed to an increase of such incidents in high schools and on college campuses.

Carl Chinn, president of the nonprofit Faith Based Security Network, said Saturday's massacre was the 15th mass murder - defined as four or more fatalities - in a house of worship in U.S. history. The first was the 1963 Birmingham, Alabama, bombing of the 16th Street Baptist Church that killed four African American girls, he said.

On Saturday, members of the Tree of Life synagogue gathered at a makeshift grief center nearby to learn the fate of loved ones. On social media, synagogue members quickly relayed news of who was safe. But there would be 11 names - all adults - missing from the check-in.

Synagogue member Arnold Freedman, 91, a psychologist, had intended to go to Tree of Life at 10 a.m., but he stayed home because a repairman was working in his basement. He began getting calls from friends as soon as the shooting began.

"Our climate in the country now is really troubled. You see these hate crimes, and anybody on either side of the spectrum, right or left, are going to blame the other. It's terrible," Freedman said. "Unfortunately, there's too many people like that, and they have too much access to guns."

Chuck Diamond, who grew up in Squirrel Hill and was a rabbi at Tree of Life for seven years, said he had always feared a day like this.

"When I was leading the congregation, I always had in the back of my mind that something like this will happen," Diamond said. "It's a terrible thing to feel. When you come into our sanctuary, you want it to be a place that you feel safe in."

As news of the shooting spread, police locked down nearby Rodef Shalom Congregation, two blocks from the Tree of Life synagogue. Police also raced to synagogues in Washington, New York City, Chicago and Los Angeles to provide additional security.

"It could have just as easily been our congregation," said Rabbi Aaron Bisno of Rodef Shalom. "We don't know what motivated the shooter, but when something like this strikes, the randomness of it terrifies."

The Tree of Life building houses three synagogues and has multiple communities that worship simultaneously, Bisno said, calling it the "center of Jewish life on Shabbat morning."

In recent years, Pittsburgh brought on a former FBI agent to act as a security point person, according to Bisno. His congregation recently went through an active-shooter training. Saturday was the first time there was a community need to put it into practice.

"It's frightening," he said. "It could happen anywhere at any time."

The FBI said Saturday that authorities believe Bowers acted alone. Authorities who entered the crime scene described it as stunning in its savagery.

"This is the most horrific crime scene I've seen in 22 years with the Federal Bureau of Investigation," said Robert Allan Jones, special agent in charge of the FBI's Pittsburgh field office.

Attorney General Jeff Sessions called the shooting "reprehensible and utterly repugnant to the values of this nation" and said the Justice Department will file hate crime and other charges "that could lead to the death penalty."

"The actions of Robert Bowers represent the worst of humanity," said Scott Brady, U.S. attorney for the Western District of Pennsylvania. "Justice in this case will be swift and it will be severe."

The Pittsburgh attack came days after the arrest of a Florida man who allegedly sent more than a dozen pipe bombs to prominent critics of Trump, and amid feverish midterm-election campaigning rife with attack ads. Several leaders have said the nation's political rhetoric has become too polarizing, perhaps inspiring recent violence.

Gab, a social media platform that has attracted many far-right users, said Saturday that the company had suspended an account that matched the alleged shooter's name, turning the messages over to the FBI. The account included repeated attacks on Jews, references to white supremacist and neo-Nazi symbols, and attacks on the Hebrew Immigrant Aid Society, known as HIAS, which works with the federal government to resettle refugees in American communities.

Mark Hetfield, president and chief executive of HAIS, said his agency has seen plenty of hate, and actively works to help people who are fleeing such hate.

Tom Malinowski, a Democratic congressional candidate in New Jersey who served as assistant secretary of state for democracy, human rights and labor in the Obama administration, posted a statement on his website saying that deranged people have always been around but that the political climate has changed.

"Our highest national leaders are legitimizing rhetoric once confined to the paranoid extremes of our society - railing against 'globalists,' who all happen to be prominent Jews, complaining about 'white genocide,' attacking immigrants for 'threatening our culture,' and spreading crackpot conspiracy theories to advocate imprisoning their political opponents," said Malinowski, who long served as the Washington director for Human Rights Watch. "These words are like sparks to the gasoline of disturbed minds. These words can kill."

The recent spate of mass shootings led Tree of Life Rabbi Jeffrey Myers to write on the synagogue's blog, lamenting the lack of national action to address gun violence in the wake of the Parkland school shooting.

"Unless there is a dramatic turnaround in the midterm elections, I fear that the status quo will remain unchanged, and school shootings will resume," Myers wrote. "I shouldn't have to include in my daily morning prayers that God should watch over my wife and daughter, both teachers, and keep them safe. Where are our leaders?"

(Except for the headline, this story has not been edited by NDTV staff and is published from a syndicated feed.)
Comments
PittsburghPittsburgh shooting