Assange's stepfather on his childhood 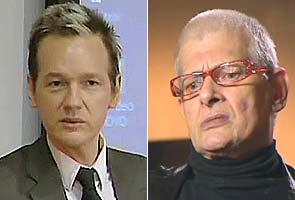 Canberra: There is an outpouring of support for WikiLeaks founder Julian Assange across the Internet. Twitter was choked with messages of solidarity for Wikileaks, and its Facebook page now has more than 1 million fans.

"Hacktivists" - under the label "Operation: Payback" - knocked MasterCard, Visa and several other website off line because they cut off fund transfers to WikiLeaks. Meanwhile, Assange is in prison fighting extradition to Sweden and the US government is pressuring corporations to limit access to the site.

So is Julian Assange a hero or a villain? Who is this man behind WikiLeaks that even US government tries to muzzle him down?

Brett Assange, the stepfather of the WikiLeaks founder, told Australian TV that he was a bright child, with a strong sense of right and wrong.

"He was very sharp, he was a very sharp kid. He was very, very sure of himself. He always stood for the underdog, I remember that like with his school friends. He was always very angry about people ganging up on other people. He also had a wonderful sense of humour. Quite sophisticated in his way, not just as far as his sense of humour is concerned but the way he looked at the world," Brett said.

He recalled a time when his stepson fell out of a tree.

Brett Assange is not surprised at what Julian has done.

"Strangely enough, I always thought that he would do something like this. He was always very independent and he certainly wouldn't take no for an answer," Brett said, adding that he "wholeheartedly" supports Julian.

"I'd like him to know that I wholeheartedly support him in everything that he's doing," Brett said.
Comments
WikiLeaksJulain AssangeBrett Assange