For the last three months, district police chief Rama Rajeshwari has been carrying out a sustained campaign to prevent killings by mob fed on rumours

Rama Rajeshwari trained 500 police officers in her district and went from village to village to campaign.

At a time when the spread of panic through fake Whatsapp videos, forwards has taken epic proportions, an Indian Police Service (IPS) officer's campaign has prevented episodes of mob violence in Telangana.

For the last three months, district police chief Rama Rajeshwari has been carrying out a sustained campaign to prevent killings by mob fed on rumours. Her district spread over 5,000 sq km has been incident-free even though there have been killings in neighbouring Nizamabad, Hyderabad, Visakhapatnam and elsewhere. Now others are looking to emulate this model.

The officers have been using the beat of the dappu, a percussion instrument, and songs to advise people not to believe in rumours or forward fake messages and videos on WhatsApp or Facebook. Campaigns like this led by local police officers have been carried out in almost 500 villages of the backward Gadwal district in Telangana.

Venkateshwar Rao, Circle Inspector, said, "Not a single incident has happened in our area because of our pro-active approach. We carried out the awareness drive in the morning, afternoon and evening.'' 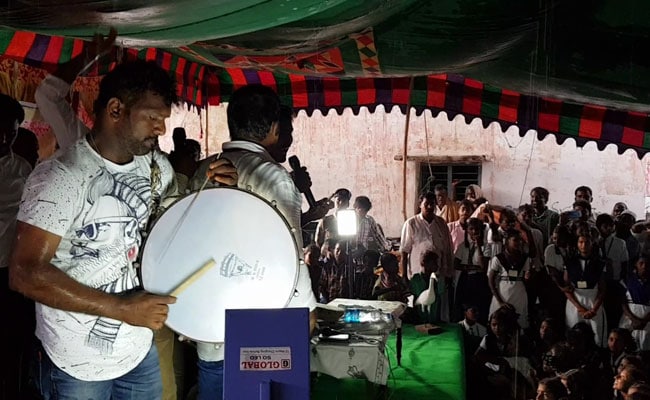 Music is being used to spread awareness about fake messages in the villages.

Ms Rajeshwari woke up early to the huge danger posed by this viral spread of faceless terror and realised it required an emergency antidote. Amid rumours of child kidnapping gangs active in various states, there was panic here as well. We were really scared, she said.

Then three months ago, she started training 500 police officers in the district and went from village to village to campaign. She interacted with villagers, made them aware of the dangers of fake messages and how those messages are translating into killings of innocent people. They were asked to immediately inform the police if they got such messages.

"We requested our local police officers to be made part of their WhatsApp groups so they could monitor anything alarming and take prompt action,'' she said.

The messages and videos that went viral had no local connection and yet they spread fear and panic, she said. Villagers say that for at least two weeks they lived in fear, terrified of gangs that could attack, abduct, maim and kill.

Lakshmi, a local said that the messages spoke of men who kidnap children, take out their kidneys and drink their blood.

"There was no real incident. But people who came from outside were attacked. That was of course wrong," said Parvathy, another villager.

On May 19, a group of pilgrims were returning from a jatra or temple festival when locals suspected them to belong to a gang and attacked them with stones and sticks in this village. As the police had organized a campaign the previous day, someone informed the cops who found them to be pilgrims. Many lives were saved.

Availability of cheap smartphones has hugely increased the use of WhatsApp. Police say apps such as ShareChat, in which local languages can be used, are even more popular. Literacy rate here is less than 50 per cent, but even those who can't read or write can share videos.

"Now it is very peaceful. We now know we should not forward these inflammatory messages. Old videos were being sent to spread fear, they turned out to be rumours,'' said Ganesh, a youngster from the village.

Karthik Kumar, village secretary, said that the message is clear to the villagers. "If you attack or kill people, we will take legal action. Inform us if you have doubts. Don't believe superstitions.''