Telangana has been recognised as the number one state in the country in the 'Regularity Category' and has been selected for the Jal Jeevan Mission Award. 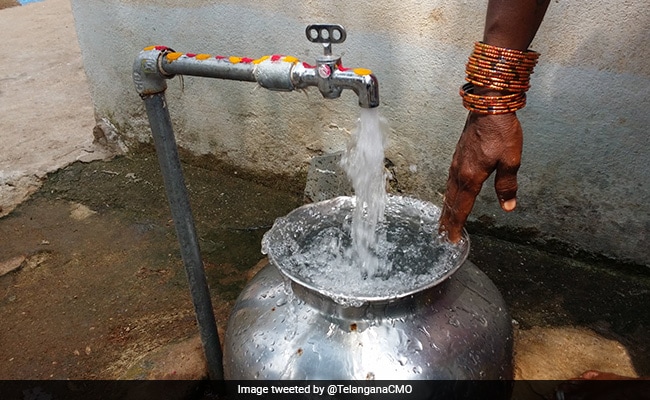 Telangana's 'Mission Bhagiratha' scheme which provides purified drinking water through taps to every household, has been bestowed with the Union government award again.

A brainchild of Chief Minister K Chandrashekhar Rao, the 'Mission Bhagiratha' scheme provides safe drinking water to every habitation in the state without leaving out even a single tribal habitat in remote, forest and hilly areas, an official release said on Wednesday.

The scheme stood as a role model for the entire country by providing purified drinking water to every house through tap, it said.

The Centre through the Jal Jeevan Mission reviewed the implementation of the scheme recently. Inspection was also conducted by a national level independent organisation in 320 randomly selected villages across Telangana. Besides, examining the quality of water and supply mechanism, the organisation also collected opinion from the people and analysed the information, it said.

"It was found that each household is getting 100 litres of per capita quality drinking water under 'Mission Bhagiratha'. It came to a conclusion that Telangana's 'Mission Bhagiratha' scheme has already set an example for the country in terms of quality and quantity. It has been noted that all the villages are provided with uninterrupted, daily quality drinking water through tap connections," the release said.

Telangana has been recognised as the number one state in the country in the 'Regularity Category' and has been selected for the Jal Jeevan Mission Award.

Through a letter, the Centre invited the Telangana government to receive the award in Delhi on Gandhi Jayanti on October 2.

The State government thanked the Jal Jeevan Mission of the Union government for recognising Telangana's progress and selecting it for the award at the national level again.

Reacting to the award, Telangana Minister for IT and Industries KT Rama Rao in a tweet said, "Thanks for the recognition but it would be befitting if the NDA Govt can honour the recommendation of NITI Aayog to grant Rs 19,000 Cr to this pioneering project."