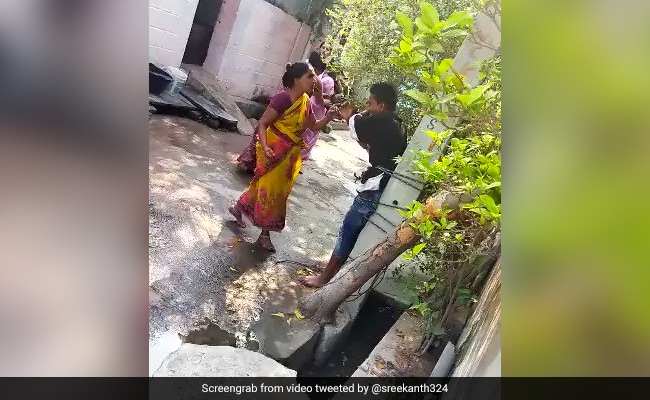 The boy is seen screaming in pain

A woman tied up her 16-year old son to a pole and rubbed chilli powder in his eyes near their house in Suryapet district of Telangana as a "punishment" over his habit of vanishing from home for several days and for reportedly getting addicted to ganja, police said on Tuesday.

The incident happened in Kodad town on Monday and a video of the same has gone viral on social media showing the woman smearing her son's face with chilli powder while another woman holds the boy's hands when he tries to resist the attempts and later the boy is seen screaming in pain.

The woman finally untied her son after he promised that he would give up on his "addiction".

What happened when a mother found out that her 15-yr-old son was becoming a ganja addict? She came up with a unique treatment. Tie him to a pole & rub mirchi powder in his eyes & not untie him until he promises to quit. Incident in Kodad, #Suryapet dt, #Telangana. pic.twitter.com/VSSMLosz64

The incident triggered a debate on social media platforms with netizens describing it as the "best Indian treatment for ganja addicts" and appreciating the woman while others said putting chilli in the eyes will not solve the issue and it won't work and termed the "treatment as equally dangerous".

A police official told PTI over phone that the teenaged boy, a school dropout, who had left home returned to their house on Monday after a week and that he had a habit of regularly leaving home for several days and his mother also suspected he had been taking some drugs and angered over it she "punished" him.

However, following the incident, police counselled the woman, her husband and their son and advised the parents that they should take their son to a doctor or a psychologist over his "habits" rather than punish him in such a manner.

"Raj Bhavan Should Be Respected": Telangana Governor On Protocol Violations