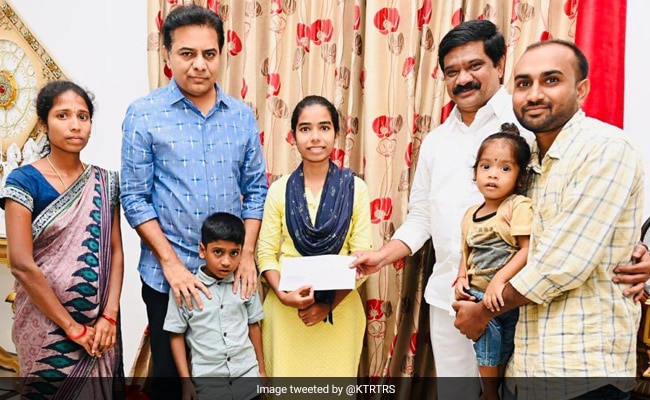 Rachana and her relatives met KTR on Monday.

A talented young woman who was helped by Telangana IT and Industries Minister K T Rama Rao three years ago to pursue her engineering course has now secured four job offers, and she thanked him for the help on Monday.

Rachana, an orphan from a poor family, secured provisional admission in a prestigious private engineering college in the city in 2019 but she did not have the money to pay for the college and hostel fees.

A request had been posted on social media three days before the last date to pay the fees.

Mr Rama Rao came to know about her situation and responded to the request immediately. He had met Rachana and her relatives and extended financial assistance for the college expenses, his office said in a release on Monday.

Rachana completed BTech in Computer Science in June, 2022. Now, she has software job offers from four prominent IT companies. As she holds a diploma in engineering, the BTech course had to be pursued for three years unlike four years for those who join BTech after Intermediate (classes 11 and 12), it said.

Rachana and her relatives met the minister on Monday.

Rachana came after graduating with 4 job offers!! Cognizant, Wipro among the offers she received

Congratulated her & wished her the best in her future pursuits pic.twitter.com/1os9vwjSgd

She hails from a village in Jagtial district. Orphaned during her childhood, she and her sister had to face many hardships during their formative years. Rachana stayed in an orphanage while pursuing Class 10.

On Monday, Rachana turned emotional as she met Mr Rama Rao and tied a 'rakhi' to him. The young woman bought a customised silver 'rakhi' with the money she saved, the release said.

Mr Rama Rao assured the graduate of further help in her future endeavors, including her dream of becoming a civil servant.

Rachana, who has overcome many challenges in her life, is an inspiration to youngsters hailing from rural areas and economically disadvantaged sections, he said.