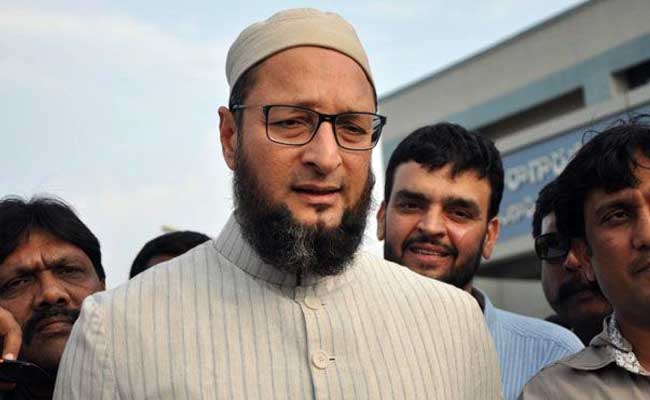 Cases against Mr Owaisi and others were registered late last night under relevant sections of Indian Penal Code (IPC).

Mr Ali, Leader of Opposition in Telangana Legislative Council, had yesterday filed a case against Mr Owaisi and his followers for allegedly attacking him in Mirchowk area.

"Mirchowk Police has registered a case against Owaisi and others under sections 143 (unlawful assembly), 323 (voluntarily causing hurt), 341 (wrongful restraint), 427 (mischief causing damage), 506 r/w 149 of IPC. The case is being probed and action will be taken against responsible persons as per facts and law," a senior police official said.

Telangana Congress chief Uttam Kumar Reddy and Mr Ali have alleged MIM party workers led by Mr Owaisi attacked them. A vehicle belonging to Mr Reddy was also damaged by miscreants. Mr Ali alleged he sustained injury below the right eye and on other body parts.

Mirchowk Police Inspector Y Yadgir Reddy said they have received a similar complaint from an Urdu daily reporter alleging Mr Owaisi and some of his followers attacked him yesterday.

Police have registered a case and a probe is underway.

Yesterday, MIM and Congress workers clashed during the Greater Hyderabad Municipal Corporation (GHMC) polls and police had to resort to lathi-charge to disperse them.

The trouble started when Congress candidate Mohammad Gouse and MIM legislator Pasha Quadri engaged in a confrontation in Mirchowk in old city following which they were taken into police custody briefly.

Mr Reddy and Mr Ali then reached Mirchowk Police station, where Gouse was kept in custody. Mr Owaisi also reached there at the same time which escalated tension between the two groups.

According to police, they had to resort to mild lathi- charge to disperse the agitated party workers when they, led by their respective leaders, gathered at the police station.