Over 30,000 devotees have been celebrating the Bonalu festival in Telangana, police said, even as experts warn against large gatherings as the country limps out of a deadly Covid second wave.

Bonalu festival: Over 30,000 devotees have been celebrating the festival in Telangana, police said

Worrying visuals of hundreds of people, most without masks and social distancing, have emerged from Hyderabad, where the Telangana government is celebrating the Bonalu festival. Among the attendees were state ministers as well - without masks, or masks pulled down below the chin - and no Covid protocols in sight.

Over 30,000 devotees have been celebrating the festival in the state, police said, even as experts warn against large gatherings as the country limps out of a deadly second wave.

Ministers Talasani Srinivas Yadav and Indrakaran Reddy were seen offering what is called Bangaru bonam or golden bonam to Goddess Jagadambika at Golconda to the accompaniment of dancers, drums and music. Social distancing went for a toss as the venue that was seen brimming with people in visuals.

The festival was also celebrated at Ujjaini Mahakali temple at Secunderabad and will continue every Sunday till August 8. 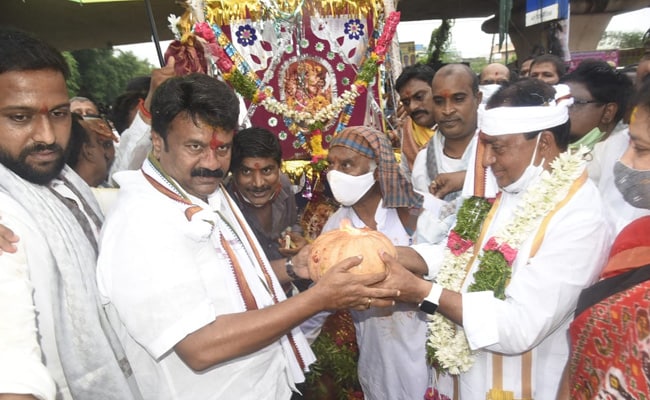 The K Chandrashekar Rao government decided to opt for grand Bonalu celebrations soon after ending all lockdown restrictions last month even as experts warn about an inevitable third wave.

Spread over a few weeks, women gather at temples, make offerings of food, flowers to Goddess Mahakali and dance together in a public celebration during Bonalu.

The festival was suspended last year because of Covid restrictions.

Rs 15 crore has been sanctioned to improve facilities at temples where Bonalu is being celebrated, Srinivas Yadav had announced last month.

The state reported 465 new Covid cases on Sunday and added four deaths. The positivity rate in the state is at 0.78 per cent while over 10,000 cases are active.

1.23 crore people have been vaccinated in the state so far with 10 per cent fully vaccinated and 45 per cent jabbed with one dose.

Congress Will Come To Power In Andhra, Telangana In 2023: Veerappa Moily