This comes after YS Sharmila's car was towed and detained by Panjagutta Police while sitting inside her SUV which was allegedly vandalised by the TRS cadre on Tuesday. 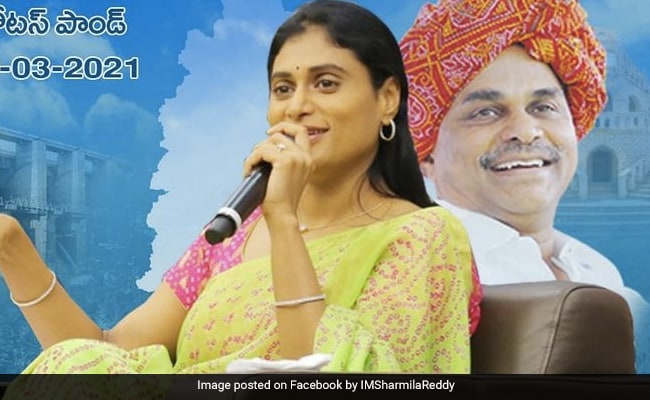 This comes after YS Sharmila's car was towed and detained by Panjagutta Police while sitting inside her SUV which was allegedly vandalised by the TRS cadre on Tuesday. She was booked on various charges including theft, criminal intimidation and public nuisance, and later in the evening produced before a magistrate.

She was detained from Somajiguda when she was approaching Pragati Bhavan to gherao the official residence of Chief Minister K Chandrasekhar Rao. She was then brought to SR Nagar Police station in Hyderabad.

Speaking to ANI and reacting to the incidents, She said, "I see it as the tyranny of the KCR government which is obvious once again. KCR is not a democratic person. KCR's was once a party that stood for values and had leaders that fought for Telangana. They have made sure that none of those people exist in the party and have driven them out intentionally. Now the party is filled with selfish and ambitious people whose only motto is to make money."

"Today, KCR's government is the most corrupt government and Kaleswaram project is the biggest scam of India. We are the only ones highlighting these issues. Everyday, in my walkathon of 3500 kms, I have raised questions as to why KCR isn't fulfilling any promises he gave. He promised to waive off the loans of farmers, to give interest free loans to women, to give one job per house to the youth, to give 2BHK to poor people and to give pensions to old people from 57 years old. He wasn't able to fulfill even one of the promises. I am the only person in Telangana fighting on behalf of the people and questioning his corruption," Sharmila said.

The YSRTP chief said, KCR is the richest politician and his government is the most corrupt government in the country.

"The sole motive of KCR has been to stop my padayatra. That's why they have gone to this length and done many things to stop the padayatra including burning my bus, destroying the windshields of all our vehicles, almost running over our people with their cars, beating our people with rods and sticks, threatening us and using abusive language. They have come to a conclusion that if the padayatra goes on, we will expose KCR so completely that people will loathe him," she added.

Sharmila added, "We plan to continue the padayatra but there are a number of leaders from the TRS party who are threatening me. They are saying things like If I step out, it's not their responsibility and their people are going to attack me. They are already making sketches and plans to make sure that this padayatra doesn't go on but I intend to carry it on."

She further added, "I am going to meet the governor to explain to her the atrocities of the KCR government. So many women are being attacked and abused these days. There is no protection for women. The crime rate against women is very high in this state. It is the highest in South India. The governor has to do something about it. I also request the governor to ask for reports from the police department as to why all these events happened yesterday, what the police did in Hyderabad and Narsampet and also to commission an enquiry."

Before being detained, police towed away Sharmila's car with the help of a crane, even as she was sitting inside it protesting against the Telangana CM KCR.

After being brought to SR Nagar Police Station, the police forcefully broke open the car door and got her out of the vehicle. She was then taken to the Police Station along with some of her followers.

On Monday, Sharmila was also detained in Warangal after the clash between her supporters and the alleged workers of the TRS party in Warangal. She was sent to Hyderabad with a police escort.