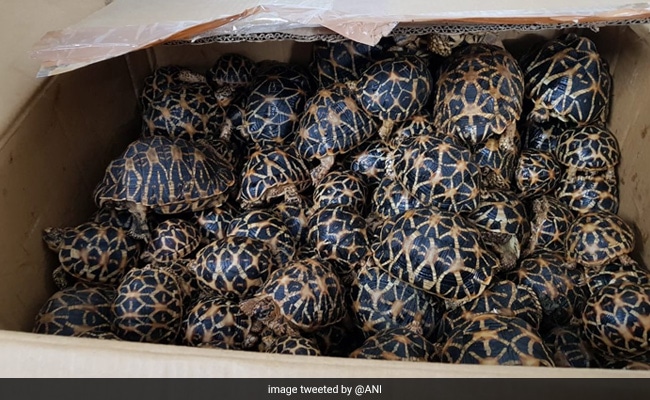 Indian star tortoises are among the most widely-trafficked animals (Representational)

An illegal wildlife trafficking operation has been busted by Hyderabad police after a joint operation with Forest Department officials, leading to the rescue of four slow lorises, an Indian star tortoise and a softshell turtle, and the arrest of a 55-year-old man.

Trade in animals classified by global conservation bodies as 'endangered' is illegal under the Wildlife Protection Act of 1972.

The operation was busted after Inspector S Raghavendra, Hyderabad (South Zone Task Force), conducted a raid on the residence of of Saleh Bin Mahammed Badam in the city's Barkas neighbourhood. Saleh was taken into custody and the animals rescued. However, Saleh's younger brother, Ali Bin Mahammed Badam, who is also believed to be part of the racket, is absconding.

The brothers ran a pharmacy store in the city that they used as cover for their illegal wildlife racket.

"Ali was reportedly procuring animals from one of his friends at a low price and making a lucrative deal by selling them to customers in Hyderabad," Chakravarthy Gummi, Additional DCP (Task Force), said.

The slow loris is a nocturnal primate that is on a Red List of endangered animals that is maintained by the International Union for Conservation of Nature (IUCN). It is hunted extensively both for sale as pets and for traditional medicines made from its organs and body parts.

The Indian star tortoise, which is also on the Red List, is a favourite in the illegal wildlife trade and is one of four species of animals flagged by TRAFFIC, a global wildlife trade monitoring network, as part of a project to crack down on animal smuggling.

Star tortoises are popular pets because they are supposed to bring good luck and prosperity. In July as many as 500 Indian star tortoises were seized by wildlife officials in Malaysia. Three men, including an Indian, were subsequently arrested.

Softshell turtles are freshwater reptiles that can stay underwater for prolonged periods. There are around 30 known species of such turtles in the world, including one found in South Asian rivers like the Ganga.