More than 50,000 idols, majority of them in Hyderabad and outskirts, are being immersed in water bodies, marking the culmination of the 10-day festivities. 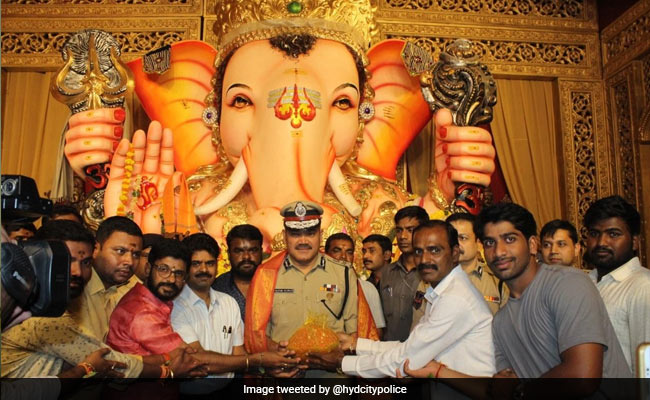 The immersion of Ganesh idols was underway across Telangana with a mammoth procession in Hyderabad amid tight security on Thursday.

More than 50,000 idols, majority of them in Hyderabad and outskirts, are being immersed in water bodies, marking the culmination of the 10-day festivities.

The police chief said one lakh idols were installed across the state this year and half of them will be immersed on Thursday. The process is likely to continue till Friday afternoon.

The biggest immersion procession began in Hyderabad as thousands of idols from various parts of the city and surrounding areas were being brought for immersion to Hussain Sagar lake located in the heart of the city.

Tens of thousands of people were participating in the 'Shobha yatra' or the centralized procession from Balapur on Hyderabad fringes to Hussain Sagar.

Ganesh idols, in different sizes and avatars, were being brought to the lake on trucks amid slogans by devotees as police were maintaining a tight vigil to prevent any untoward incident.

Elaborate security arrangements were made along the 20 km procession route from Balapur to Hussain Sagar. As the procession passes through communally-sensitive old city, the police are keeping a tight vigil with the deployment of large number of personnel including those drawn from Rapid Action Force (RAF), anti-Maoist elite force Grey Hounds and anti-terror wing OCTOPUS.

Rashtriya Swayamsevak Sangh (RSS) chief Mohan Bhagwat will address the procession at Moazzam Jahi Market, Hyderabad in the evening. Bhagyanagar Ganesh Utsav Samithi (BGUS), which has been organising the procession since 1980, has invited the RSS chief.

Police have made additional security arrangements in view of Bahgwat's participation in the procession.

Top police officials are monitoring the processions from control rooms set up at the state headquarters and in the three police commissionerates.

Officials said over three lakh CCTV cameras were being used to monitor the centralized procession and other small processions joining it and also at Hussain Sagar.

The main procession began from Balapur with the traditional auction of 'laddu' (sweet). A devotee bought the 21 kg 'laddu' for Rs 17.60 lakh.

The 61-feet-tall idol, the tallest in the state, was the first to begin its journey from Khairatabad, in the heart of the city. The massive idol took more than four hours to cover a distance of 1.5 km.

Huge cranes were deployed for immersion of the tallest idol named 'Dwadashaditya' with 12 heads and 24 hands and adorned with 12 snakes.

Officials said immersion was taking place at 50 places in and around Hyderabad. Authorities have deployed over 200 cranes, majority of them at Hussain Sagar.

Sanitation workers will also clear debris from Hussain Sagar and other bodies. Officials said an estimated 1,500 tonnes of additional waste will be generated during the immersion.

As the massive procession brings the city to a halt, authorities have declared a general holiday. Police have imposed restrictions, which will continue till Friday afternoon.

"She Called Sister, Not 100": Telangana Minister Shocker On Vet's Murder