A 27-year-old man from Hyderabad printed his wedding card with a special appeal to the guests - vote for Prime Minister Narendra Modi in the upcoming polls. 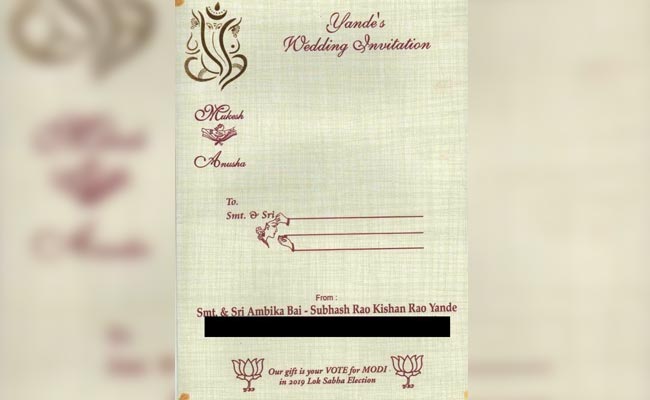 From 'no gifts' to 'only flowers', wedding cards often make requests to guests. One 27-year-old man in Hyderabad had a different idea, printing a special appeal on his wedding card - vote for Prime Minister Narendra Modi in the upcoming polls.

Mukesh Rao Yande, an ardent supporter of the prime minister, requested the guests to skip extravagant presents for their wedding and instead vote for PM Modi in the general elections, news agency PTI reported.

The cover of Mukesh and Anusha's wedding invite seems like any other card at a first glance, but has the words: "Our gift is your vote for Modi in 2019 Lok Sabha Election". A lotus - the BJP's official symbol - is also seen before and after the message on the card.

However, the idea, proposed by Mukesh Yande was not received well by his family in the beginning who claimed that guests may have different political views, news agency IANS reported.

In the end, the assistant engineer got his way, getting about 600 wedding invites printed for his 21 February wedding.

"We are all so busy with our day-to-day affairs that we find it difficult to dedicate time to do something for our nation... The least we can do is to support someone who toils for the nation," Mukesh Yande was quoted by PTI as saying.

"Few of my family members did object to this at first, but I convinced them... It is my way of endorsing Narendra Modi's work," he added.

The 27-year-old supports the Telangana Rashtra Samithi (TRS) in the state, but wants to see PM Modi continue in his leadership role, IANS reported.

Last month, a couple in Gujarat made the same appeal, though topping it with a Rafale fighter jet-themed wedding card with the words "Keep calm and trust NaMo" inscribed on it. The wedding card caught the prime minister's eye and he wished the couple and blessed them to have "a happy and prosperous life."

A couple from Haryana too has been reported to have made a similar appeal with a small difference - Vote for Aam Admi Party, read their wedding invite.