The term of K Chandrasekhar Rao's Telangana Rashtra Samithi or TRS government is till May 2019, and elections, as per schedule, should happen along with Lok Sabha elections.

September 2 is the fourth anniversary of Telangana's formation.

Telangana Chief Minister K Chandrasekhar Rao could announce the dissolution of the state assembly today so that elections can take place early along with polls to four other states later this year, say sources.

The Telangana state cabinet will meet at 1 pm today ahead of what is being billed to be the largest public meeting in Indian history later this afternoon. The party has identified 2,000 acres of land for holding its meeting - dubbed the Pragathi Nivedhana Sabha - in Ranga Reddy district today.

The venue was, however, battered by overnight rains, with the carpets in front of the main podium soaked in rainwater.

"You can expect important political announcements by our party leader. And after this meeting, political climate in the state will most certainly heat up" the chief minister's son and Telangana's municipal administration and IT minister KT Rama Rao, popularly known as KTR, told NDTV. The venue of the TRS meeting was soaked in rainwater overnight

He did not, however, officially confirm the decision to dissolve the assembly and to go for early polls.

The term of K Chandrasekhar Rao's Telangana Rashtra Samithi or TRS government is till May 2019, and elections, as per schedule, should happen along with Lok Sabha elections.

September 2 is the fourth anniversary of Telangana's formation and the ruling TRS wants to showcase four years of its rule by presenting a report card of its achievements to the people. 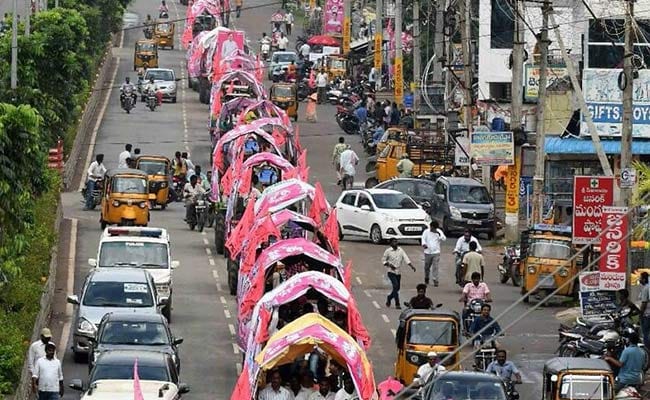 The TRS is organising the "most-attended public meeting" in India's history tomorrow.

Separately, BJP president Amit Shah is also said to have conveyed to his party leaders in Telangana that elections to the state will be held by the year-end and they must gear up for it. Amit Shah met BJP lawmaker Bandaru Dattatreya and other leaders at Shamshabad airport on his way to Mantralayam in Kurnool for a 'chintan baithak' of the Rashtriya Swayamsevak Sangh or RSS.

Opposition parties say the ruling TRS is concerned that they are consolidating and joining hands. "That is worrying the ruling party and so they want to rush for early polls, months ahead of schedule," Telangana Pradesh Congress Committee chief Uttam Kumar Reddy has said.

TRS lawmaker from Nizamabad and K Chandrasekhar Rao's daughter Kalvakuntla Kavitha says there is no opposition in the state and they will come a distant second.

"We are totally confident of all that we have managed to achieve in the last four years. After four years of TRS governance, we are presenting a report card to the people," she said.

"We have always held massive meetings and our leader believes in face-to-face interaction. That's why we are doing a meeting of this scale because people want to hear their leader speak," Ms Kavitha added.

KTR dismissed the opposition efforts to fight the TRS together by joining hands as a maha 'ghatiya' bandhan (terrible alliance), a play of words on the opposition's unity at the national level, dubbed mahagatbandhan or grand alliance.

K Chandrasekhar Rao had gone to Delhi last weekend and met Prime Minister Narendra Modi, Home Minister Rajnath Singh and others, triggering speculation that he had gone to push for early elections. The TRS would not want a situation where they dissolve the assembly but the elections are held only months later.

This had happened to Chandrababu Naidu when he dissolved the Andhra Pradesh assembly after an attempt on his life at Alipiri in October 2003, but the elections took place only in April-May 2004.