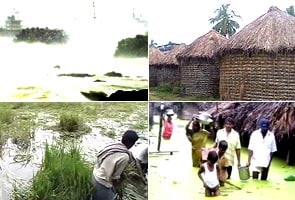 Puducherry: A day after Cyclone Thane left a trail of destruction in the Union Territory; a massive operation was on to clear the debris, even as Chief Minister N Rangasamy announced financial aid to the victims.

As per initial estimates, the damages suffered was in the range Rs 1,500 to Rs 2,000 crore, Rangasamy told reporters after holding a meeting with top officials. He added that it would take a couple of days to complete the assessment.

The Chief Minister announced Rs 2,000 aid to all ration card holders. Apart from this, Rs 1,800 would be provided as cyclone relief to 30,265 people belonging to fishing community.

Prime Minister Manmohan Singh has assured to send a Central team to assess the damages, he said. Union Home Minister P Chidambaram would visit the affected areas to make an assessment of the damages on Sunday.

Rangasamy said nearly 75 per cent of the trees were uprooted and efforts would be made to make Puducherry green again by planting more saplings. He added that Bharathi Park, Botanical garden would be renovated.

The Chief Minister said 63 transformers were damaged in the Bahour, Villianur and Korkadu areas. He said power supply has been restored in some parts of Puducherry and by January 2, the supply to all parts would be restored.

Meanwhile, civic authorities had to sweat it out throughout Saturday to clear the fallen trees and the debris strewn around.

However, people in rural areas were left to struggle as the authorities were yet to reach out to them. People residing in coastal areas like Vambakeerapalayam, Thengaithittu were still struggling to overcome the hardships.

Around 1,500 families had been shifted to community halls and schools. Most of them have returned home after weather improved.

Promoted
Listen to the latest songs, only on JioSaavn.com
Long queues were seen at petrol pumps on Saturday. People resorted to panic buying as pumps started 'rationing' fuel. When contacted, an official at a petrol pump told Express that tanker lorry movement had been affected by the disruption of traffic but the panic buying forced them to restrict sales to specific amounts. He said more stock is expected by Saturday evening.