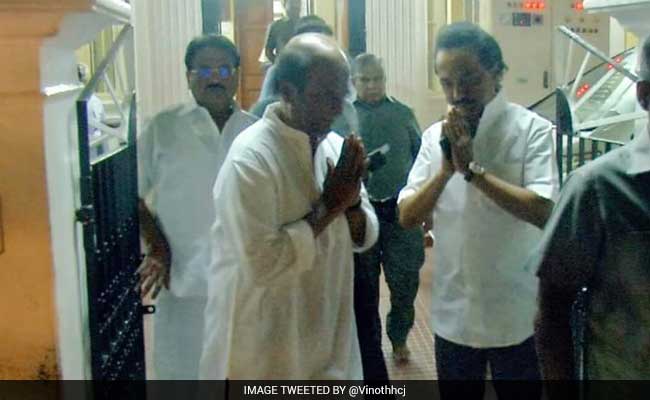 Chennai: Actor Rajinikanth today called on DMK chief Karunanidhi who was recently hospitalised for a week for nutritional and hydration support and enquired about the 93-year-old leader's health.

Clad in a white kurta, Rajinikanth arrived at the Gopalapuram residence of Karunanidhi and spent some time with the leader and enquired about his health, DMK sources said.

Noted Tamil lyricist Vairamuthu too visited Karunanidhi and enquired about his health at the same time.

The former Tamil Nadu chief minister was admitted to the Kauvery Hospital in Chennai on December 1 after being treated at home for a drug-induced allergy.

Promoted
Listen to the latest songs, only on JioSaavn.com
"After medical treatment, he has improved substantially and was discharged from the hospital," Kauvery Hospital Executive Director Dr S Aravindan had said on December 7.

On December 8, the party had asked its workers and well- wishers to avoid visiting the leader as he had been advised rest and warned against contracting any infection.