Tamil Nadu on high alert: Security in Chennai and Coimbatore has been strengthened, with hotels, airports, railway stations, theatres, shopping malls and places of worship under close watch. Kerala is also on alert, with border districts ordered to be on watch

High alert in Tamil Nadu: Over the past few months the NIA has arrested 10 men from the state

Tamil Nadu Police are on high alert following intelligence reports that six Lashkar-e-Taiba (LeT) terrorists have infiltrated the state. One of the six is believed to be a Pakistani national, the others are believed to be from Sri Lanka. Police are also on alert in neighbouring Kerala, with districts adjoining Tamil Nadu ordered to carry out extra inspections.

"We have received this information and have alerted our force. We want the public to inform the police if they see any suspicious person or any suspicious activity," a top Tamil Nadu police officer told NDTV.

Security in Chennai and Coimbatore has been strengthened, with hotels, airports, railway stations, theatres, malls and places of worship under close watch.

At least 2,000 police personnel have been deployed around Coimbatore, where a red alert has been sounded. According to news agency IANS, the LeT terrorists are believed to be hiding in the city.

Coimbatore has come attack from fundamentalist groups in the past. In 1998, serial blasts coinciding with the visit of senior BJP leader LK Advani killed 58 people and left 200 injured.

"There is no need for panic, Everything is under control," Coimbatore Police Commissioner Sumit Sharan said, adding that the Army and the Air Force had also been alerted.

"We have strengthened security and conducting vehicular checks too in several places," a senior Chennai police officer told NDTV.

Security has also been increased in the temple town of Rameswaram in Tamil Nadu, as also the Nagapattinam coast where the Shrine Basilica in Vailankanni, a famous Christian pilgrim centre, has been given extra protection, according to news agency PTI. 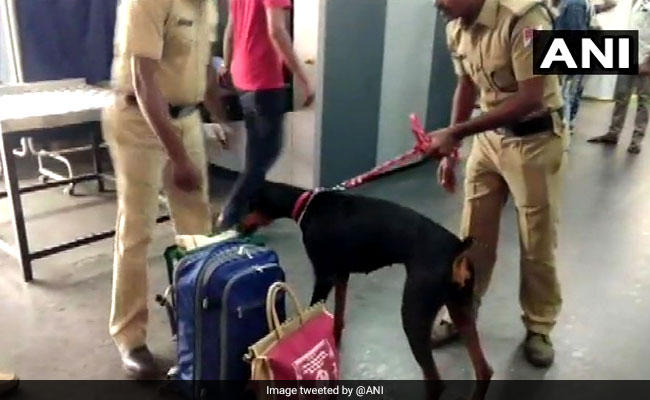 In Kerala, Police Chief Loknath Behra has ordered district chiefs to increase security. Additional police personnel have been dispatched to bus stands, railway stations, airports and other places of public gathering. Security has been strengthened around places of worship.

Kerala Police have urged the public to report anything suspicious on 0471 2722500.

Over the past few months the National Investigation Agency (NIA) has arrested at least 10 men, from across Tamil Nadu, suspected to have links to banned terrorist organisation ISIS. Investigators allege they had plans to launch terror attacks in the state. The families of those arrested denied the links and claimed they were being targeted.

One of those arrested after raids at seven locations across Coimbatore was Mohammed Azarudeen, the alleged mastermind of ISIS' Tamil Nadu module, who allegedly had links to the Easter suicide bomber attacks in Sri Lanka.

The agency had received the information that the accused and their associates were allegedly propagating ISIS ideology on social media and recruit young people. Cases were registered against Azarudeen and five other men from Coimbatore for planning terror attacks in Tamil Nadu and Kerala.

In July the NIA conducted anti-terror raids at homes cross a number of other Tamil Nadu cities, including Chennai and Madurai. The homes belonged to 14 men arrested by the agency after they were brought to India from the UAE, where they were allegedly raising funds with which to return and set up an ISIS terror cell.