He said that the BIP government had passed the farm bills which is against farmers and should be revoked immediately. 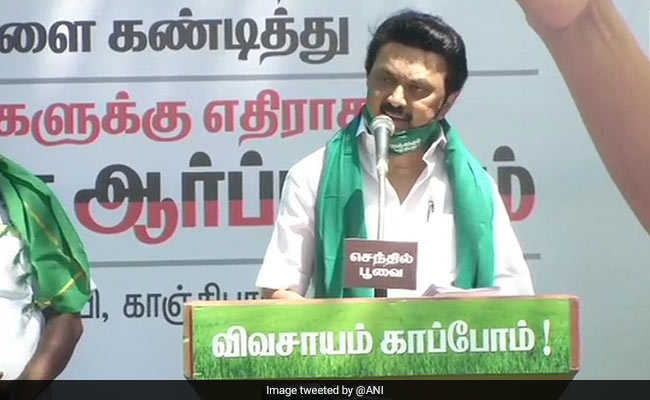 MK Stalin said that the Central government and state government are working against farmers.

Dravida Munnetra Kazhagam (DMK) president MK Stalin on Monday took part in a protest against Farm laws in Keezhambi village of Kanchipuram and requested the state government to approach the court against Acts.

Speaking during the protest MK Stalin said, "Our neighbouring state, Kerala is opposing and plan to approach the court against Farm bills passed in the Parliament. We ask our state government to do the same or else opposition parties will approach the court on the issue."

He said that the BIP government had passed the farm bills which is against farmers and should be revoked immediately.

"On September 22, this bill was passed and we called an all-party meeting in which we decided to call for state-wide protest. Total of three lakh people are protesting today," MK Stalin said.

"Prime Minister Narendra Modi says he is a son of poor but it's him who makes many infants poor. Likewise in Tamil Nadu, Chief Minister is the one who says he is a farmer but after his party came in power, the life of a farmer is fading away. He advertises himself as a farmer but didn''t come forward to help farmers," he said.

"A farmer will be thrown away from his own land when this bill is implemented," added MK Stalin.

He said that Punjab was the first to protest as Shiromani Akali Dal (SAD) pulled out of its alliance with the NDA government after the passage of Bills.

"Punjab protested first. The SAD party is an alliance party which opposed it and came out of 50 years old NDA alliance and even central minister resigned," he said.

MK Stalin said that the DMK and alliance will continue to oppose whatever bill will be introduced against people.

"Some says DMK and its alliance are opposing it. Yes we are opposing and will continue to oppose whatever bill will be introduced against people. It's not only Tamil Nadu but states like West Bengal, Rajasthan, Karnataka, Haryana, Punjab, Uttar Pradesh and Kerala are also against the laws," he said.

Attacking on centre, MK Stalin said that Prime Minister Narendra Modi promised that two crore jobs will be provided but nothing happened.

"Central government has introduced the bill without discussion with state governments. PM Modi will through many election promise but will forget them after coming into power. He promised two crore jobs but not even one person got job. He said he will raise Indian economy to world status but did not do anything on it," DMK Chief said.

Before taking part in the protest, MK Stalin took a brief walk into the field and talked to farmers.

The three farm bills passed by both the houses of the Parliament had recently received the assent of President Ram Nath Kovind.

Protests by farmers against the three farm bills have been ongoing since the past few days in Punjab, Haryana, along with other states in the country.

The Bills that have now become acts are - The Farmers Produce Trade and Commerce (Promotion and Facilitation) Act, 2020, The Farmers (Empowerment and Protection) Agreement on Price Assurance and Farm Service Act, 2020 and The Essential Commodities (Amendment) Act, 2020.