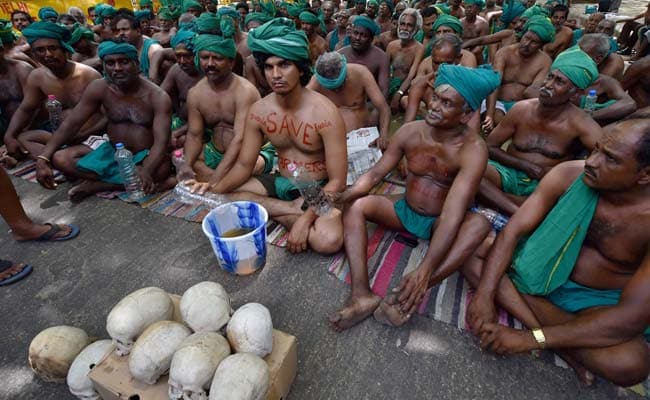 Tamil Nadu is bracing for a bandh called by DMK-led opposition parties in support of farmers. (File)

Chennai: Tamil Nadu is bracing for a bandh called by DMK-led opposition parties today in support of drought-hit farmers even as the state government asserted that normalcy will not be affected. Police said all steps have been taken including deployment of adequate personnel across the state to ensure maintenance of law and order. DMK, Congress, CPI(M), CPI, VCK, IUML and a host of trade unions affiliated to the opposition parties, farmers bodies, the film fraternity and other organisations including a lorry operators association have pledged support to the general shutdown.

Also, associations of local vegetable markets, groceries, several trade unions of auto-drivers are among those who support the bandh.

State government sources, however, said essential services will not be affected and claimed that the bandh will not have any impact since all necessary measures have been taken to see to it that people were not inconvenienced.

Local, long-distance buses of the state-run transport corporations and trains will ply as usual and essential services including milk and electricity supply will be normal, they said.

Ruling AIADMK (Amma) and the BJP have hit out at the bandh call terming it politically motivated.

According to DMK, the bandh is to urge the central and state governments to fulfil the demands of farmers and farm labourers which includes adequate relief and setting up of Cauvery Management Board.

Other demands include remunerative price for paddy, sugarcane, immediate disbursal of cane arrears to the farmers, increasing the water level of Mullaperiyar dam to 152 feet and cancelling Methane and Hydrocarbon projects.

Promoted
Listen to the latest songs, only on JioSaavn.com
Waiver of crop loans given by nationalised banks, adequate monetary compensation to farmers affected by drought are among the demands of a group of ryots who protested in Delhi and in other parts of Tamil Nadu.