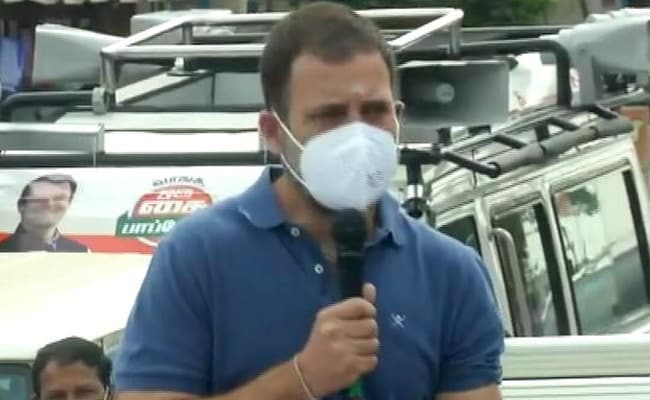 Congress leader Rahul Gandhi, who yesterday kickstarted his party's campaign for elections in Tamil Nadu in May, doubled down on his criticism of Prime Minister Narendra Modi and the BJP - which is allied with the ruling AIADMK - this morning, accusing them of insulting Tamil language and culture, and crippling people of the state with schemes like demonetisation and the GST regime.

"The centre has no respect for Tamil language and Tamil culture. I am not going to allow Prime Minister Narendra Modi and the BJP to disrespect Tamil people," Mr Gandhi said at a rally Erode district in western Tamil Nadu, an area that is widely seen as a stronghold of the ruling AIADMK.

"Demonetisation, GST (Goods & Services Tax), and fuel price hike have crippled the people of Tamil Nadu. The country is in the hands of five or six businesspeople (and) they think that if they control the state government, they can control the Tamil people. But this is not true," he said.

"History shows the Tamil people cannot be cheated," he said today, reminding voters of a "family relationship" with the state. Mr Gandhi's father, former Prime Minister Rajiv Gandhi, was assassinated at Sriperumbudur (near Chennai) in May 1991.

"I know of your respect for my grandmother and father. I've come to listen and understand your problems and to rectify them. I understand and respect Tamil culture," he stressed.

Mr Gandhi has been camped out in western Tamil Nadu since his arrival yesterday, as the DMK (the Congress' ally) and he looks to repeat their sweep of the state in the 2019 Lok Sabha election.

As he landed in Coimbatore, Mr Gandhi said: "Tamil Nadu requires a new government. That is why we want to work with you to get a government that you would be proud of."

He also met industry reps in a city famed for its textile industry, and which boasts four special economic zones (SEZs), and told them the current tax system had crippled MSMEs.

These will be the first state elections since two of Tamil Nadu's tallest and most influential political leaders - the AIADMK's J Jayalalithaa and the DMK's MK Karunanidhi passed away, leaving a massive power vacuum that many are racing to fill.

In the 2019 Lok Sabha polls, the DMK- Congress alliance won 38 of 39 seats. But the Congress missed the bus in 2016 state election, winning just eight of the 41 seats it contested. As a result, and despite the DMK performing well, the AIADMK returned to power.

This time reports suggest the Congress - perhaps chastened by continuing poor results in other states, most recently Bihar - is willing to contest in fewer seats if it means a win for the alliance.