Thousands of local residents have been protesting for more than three months that the Sterlite copper smelting plant be shut down but complain that the state government had not responded to their demands.

About 20,000 people gathered at the protest site today and stormed the district collector's office

Chennai: Nine people were killed as police opened fire on protesters who went on a rampage today demanding closure of a copper smelting plant in Tamil Nadu's port city of Tuticorin, prompting the ruling AIADMK government to issue appeals for calm and a promise to take legal action against the plant.

"The police had to take action under unavoidable circumstances to protect public life and property as the protesters resorted to repeated violence... police had to control the violence," Palaniswami, who holds the Home portfolio, said.

Thousands of local residents have been protesting for more than three months against the Sterlite copper smelting plant and its reported expansion but complained that the state government had not responded to their demands. They had intensified protests demanding closure of the plant after reports came in that the group was seeking licence for expansion as the initial 25 year licence comes to an end.

Senior Tamil Nadu minister Jayakumar said that the police didn't have an option but to open fire since the protests had turned "extremely violent". The police firing was unavoidable, he said. 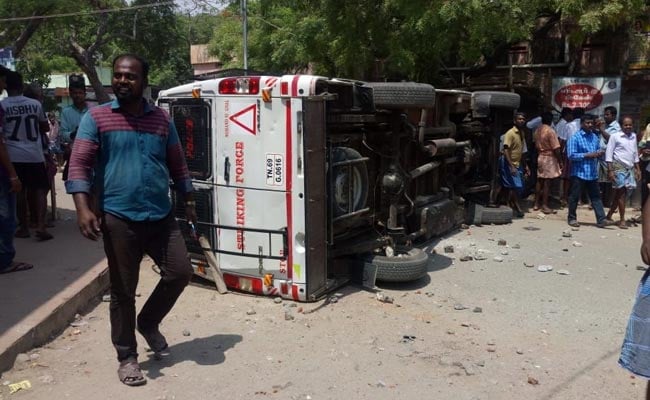 Government property was damaged in the protest

MK Stalin of the opposition DMK blamed the state government for the violence, saying that people had been protesting peacefully for so long but the administration did not attempt to address the concerns of the people. The plant should be shut down, Mr Stalin said.

Actor-politician Kamal Haasan made a similar point, "Citizens are not criminals... They are the ones who lose their lives," Mr Haasan, who had earlier participated in the peaceful protests against the plant, said. "It is the negligence of the government... The government ignored peaceful protests," he said.

In a late night statement, Sterlite Cooper said it has appealed to the government and authorities to ensure safety of employees and facilities. "It's with great sorrow and regret that we witnessed today's incidents around the protest today at Tuticorin... Sterlite Copper plant is non-operational," it said.

In March 2013, hundreds of people suffered breathing difficulty, nausea and throat infection following an alleged gas leak from the plant. Though the plant was ordered to shut down following allegations of violating pollution control norms, the National Green Tribunal had ultimately allowed it to be reopened.

Promoted
Listen to the latest songs, only on JioSaavn.com
The same year in another case spearheaded by MDMK chief Vaiko, the Supreme Court had slapped a 100 crore fine on the plant for polluting over the years. However, at that time Sterlite, run by the Vedanta group, had claimed it adheres to pollution control norms.

Sterlite began operations in 1996. It now employs about 1,000 people full time and about 2,000 on contract. It also provides indirect employment opportunity for around 25,000 people.