"Honour To Be Draped In AIADMK Flag": OPS Denies Rumours Of Joining BJP

Some reports on social media had even suggested that O Panneerselvam, or OPS, was keen to become a Governor as a quid pro co. 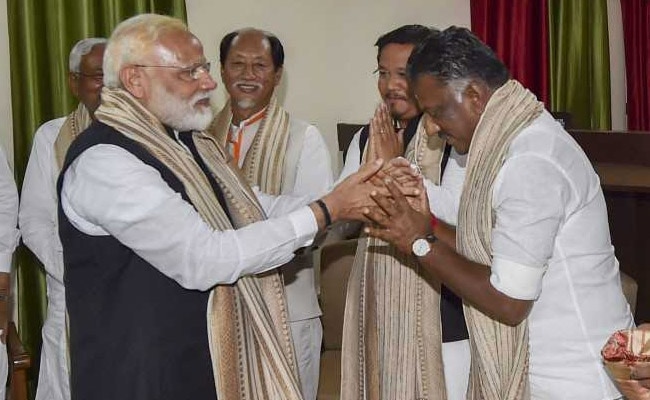 Tamil Nadu's Deputy Chief Minister and AIADMK leader O Panneerselvam has denied reports that he plans to join the BJP. Calling it a lie, he said in  statement, "Even when I die, I'd deem it an honour to be draped with AIADMK flag."

The speculations began after Mr Panneerselvam, or OPS, joined Prime Minister Narendra Modi in Varanasi earlier this week when PM Mod filed his nomination papers for the national election.
Some reports on social media even suggested that OPS was keen to become a Governor as a quid pro co.

J Jayalalithaa, the late AIADMK chief and four-time Chief Minister of Tamil Nadu, had refrained from joining hands with the BJP after 1998. However, after her death, her party formed an alliance with the national party that is in power at the centre.

The BJP was given five of the state's 39 parliamentary seats to contest from in the national election.

Critics allege that the national party which, has a negligible presence in Tamil Nadu, arm-twisted the AIASMK  for alliance by taking advantage of the corruption cases against several of its ministers and senior bureaucrats. The CBI and the Income Tax authorities had raided the state Health Minister, police chief and the Chief Secretary. The BJP has denied these allegations.

Citing the personal rapport Jayalalithaa had shared with PM Modi from his years as Gujarat chief minister and how they attended each other's swearing-in ceremonies, Mr Panneerselvam said, "We only follow Jayalalithaa's path, having friendly ties with the BJP. I am sad that attempts are being made to hurt me and my political life."

After several months of tug of war, OPS and EPS patched up.

Though both leaders claim they work as a double-barreled gun, many say there is still a silent tussle for the top job in the state.