M Karunanidhi fell ill in October last year due to a drug-induced allergy. 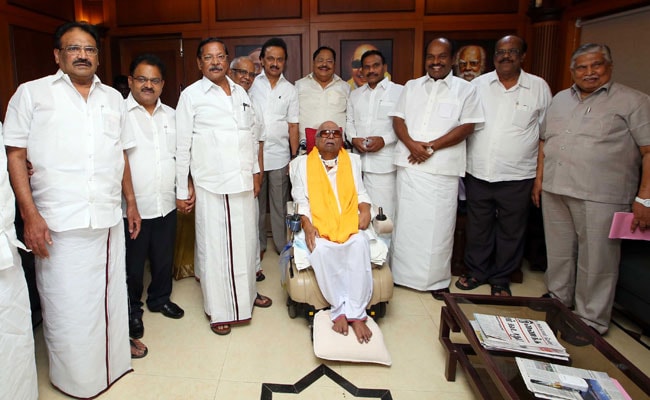 M Karunanidhi visted the DMK party office in Chennai with son MK Stalin and others.

The 93-year-old veteran was accompanied by his son and DMK working president MK Stalin, daughter Selvi and senior leader Durai Murugan, among others. The leader briefly interacted with them and reportedly signed a register there.

M Karunanidhi fell ill in October last year due to a drug-induced allergy. In December, he was admitted to a private hospital here twice.

He was admitted to the hospital for "optimisation of nutrition and hydration" in the first week of December and later, due to a throat and lung infection. He had undergone tracheostomy, a procedure to optimise breathing.

Congress Vice-President Rahul Gandhi had called on the DMK patriarch at his residence in December 2016. Prime Minister Narendra Modi met the DMK leader in November this year during the former's visit to Chennai.

Earlier, Mr Karunanidhi had made a public appearance in October this year when he visited an exhibition held for the 75th anniversary of party mouthpiece Murasoli.