Kamal Haasan's Makkal Needhi Maiam Releases First List For Polls, But He's Not On It

Launched a year ago, keeping fight against corruption and development of rural Tamil Nadu as its key focus, the MNM chose to not join hands with the two Dravidian parties. 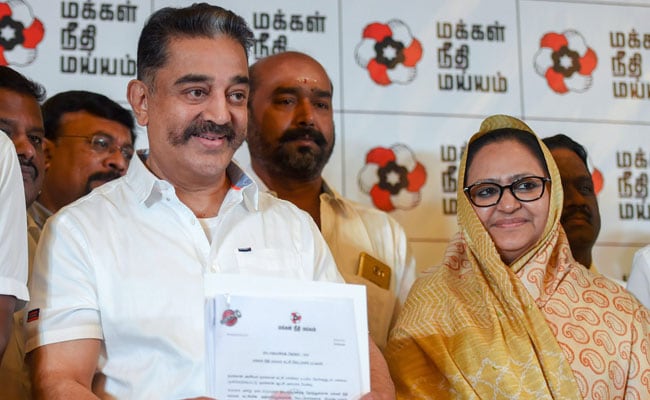 Kamal Haasan said, "I wish to contest but my party cadre will have to decide". (PTI)

Actor-turned-politician Kamal Haasan's Makkal Needhi Maiam has released its first list of 21 candidates in Tamil Nadu and Puducherry for Lok Sabha elections. The list, however, does not include Kamal Haasan. The second list for the remaining 19 seats would be released in Coimbatore on Sunday.

On whether he would contest, Kamal Hassan said, "I wish to contest but my party cadre will have to decide." He added, "The announcement on March 24 (Sunday) would have surprises."

Dr MAS Subramanian is MNM's candidate for Puducherry. He had recently switched from the DMK.

A few days ago, CK Kumaravel, a well-known entrepreneur and Executive Committee member of the party resigned from the primary membership citing "politics". Accepting his resignation, a statement from the party said he had posted on social media about his candidature for Chidambaram constituency even when interviews were still going on and that his explanation was not satisfactory.

Mr Kumaravel claimed he was actually given the go-ahead to do preparatory work. Now the party has fielded T Ravi, a businessman for Chidambaram.

Launched a year ago, keeping fight against corruption and development of rural Tamil Nadu as its key focus, the MNM chose to not join hands with the two Dravidian parties - the ruling AIADMK and the DMK - it has been so critical of. From the beginning, Kamal Haasan had ruled out alliance with the BJP saying, "saffron is not our colour." Initially, there was speculation that Kamal Haasan could ally with the Congress after the state Congress chief had hinted at it. A few days ago, a lesser known Republican Party of India had forged an alliance with the MNM.

Superstar Rajinikanth, who is yet to launch his party and has chosen to not contest Lok Sabha polls, had greeted Kamal Hassan. Thanking him and tacitly seeking his support, Kamal Hassan tweeted, "If good people supported all 40 seats would be ours."

In a shift from the norm mainstream parties follow, MNM has given tickets to several non-members, who are involved in social work, health care and human rights issues.