Prisha has won several awards and has set records, not just in India but also Thailand and Malaysia. 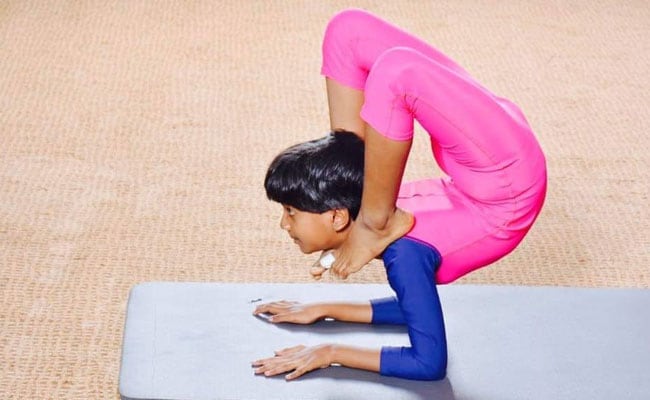 A ten-year-old prodigy in Tamil Nadu - who teaches yoga to the visually-impaired in the Tirunelveli district - has won many hearts with her sheer talent and willingness to help people learn the discipline.

During the weekends, K Prisha, a class 5 student, visits special schools and old age homes to teach yoga, which, she says, "enhances the quality of life".

At one of the government schools for the visually impaired in the district, 14-year-old Hari Aakash recollects how Prisha introduced him and his friends to the benefits of yoga.

Aspiring to become a software engineer, Hari, the son of a labourer, says he practices yoga almost daily at his hostel.

"Over the last six months, my focus and concentration have improved," he says.

Sandhanamari, a class 10 student with partial vision, says she is always excited to attend the yoga classes.

"My memory power has improved because of yoga. My eye power too has slightly improved ever since I made yoga a part of my routine," she adds.

Helen, the assistant head mistress of the school, says: "Visually challenged children love yoga. As Prisha demonstrates, we too give an oral commentary for the children to follow the discipline. We also help them do asanas  as she does."

F Seema, a teacher in the Sri Nammaazhvar Middle School, says, "We love her (Prisha's) dedication".

Prisha's mother G Devi Priya - a lawyer by qualification and a yoga teacher by passion - is her Guru, says the young girl. She was just a year-and-a-half-old when her mother started inspiring her.

"She performed a few asanans when she was crawling... even before she could walk," Devi recollects.

According to the website - www.recordsetter.com - Prisha broke a record in Rajakapotasana with a three-minute chin stand.

She has 16 records to her credit - most of them in water made in a single day - that are listed in the Asia Book of Records, besides others. The class five girl is now eyeing a Guinness World Record.

However, her passion, she says, is to use yoga for the common good, particularly for the differently-abled and old people. "I want to adopt a village and teach Yoga for all. Their concentration would improve. I just love teaching Yoga," she sums up.